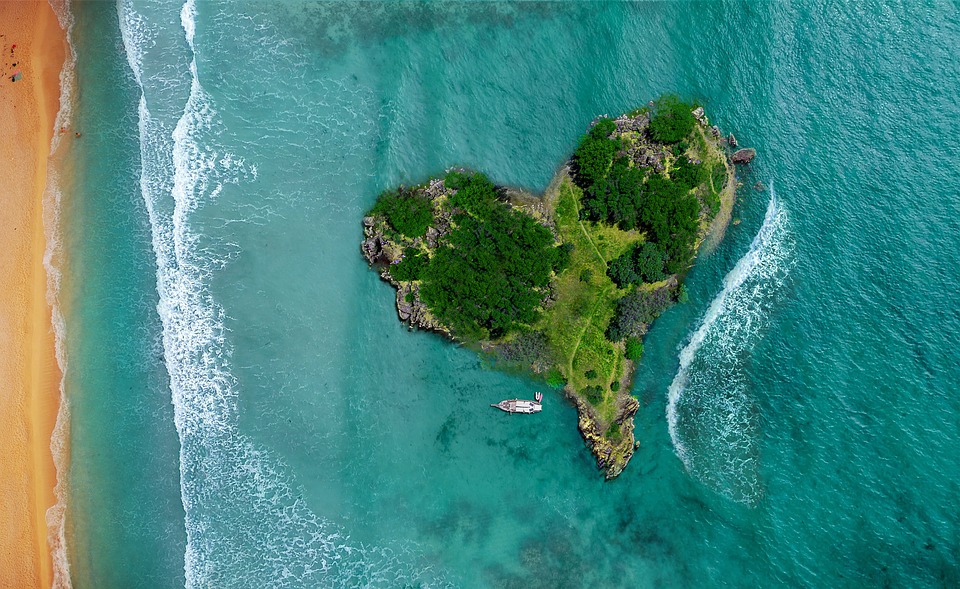 To dream of a rocky island
If you see a rocky island in a dream, it symbolizes love arguments. There is a chance that you and your partner will not have the same future goals, which will lead to alienation and conflicts. Both of you will feel betrayed because you have had different expectations and wanted to benefit from investing in that relationship accordingly.

To dream of a deserted island
When you see a deserted island in a dream, it means that you are overwhelmed. You have a stressful job and get exposed to immense pressures daily. You often fantasize about throwing your phones, notebooks, and computers away and going somewhere far with a one-way ticket. You know that something like that is impossible because many people count on you and need you.

To dream about being with a loved one on a deserted island
This dream is a sign that you have to pay more attention to your partner. Indeed, you have many obligations and problems, but you can’t neglect your relationship. It would be enough to spend a few minutes together, exchanging affection, not to distance yourself from one another. If you care about everything else more, your relationship or marriage doesn’t have a bright future.

To dream of hiding on a deserted island
If you dream of hiding from someone on a deserted island, it means that you regret some past actions. There is a chance that you often think about it and that your consciousness is restless because of some mistakes. However, it is too late to change anything now, so it would be better to focus on the present and start thinking about the future. Take that as a lesson that you acquired so that you don’t have to repeat the same mistakes again.

To dream of being trapped on a deserted island
Being trapped on a deserted island in a dream means that you are self-destructive. You set all your ideas and plans to failure even before you try to put them into action. That is probably the result of a lack of self-confidence or deeply-rooted insecurities. You have to overcome that problem to make progress in life at all costs.

To dream of disembarking on a deserted island
When you dream of disembarking a boat on a deserted island, it means that your family member or partner will leave you no choice. That person will do something without asking you for advice or without your knowledge. You will perceive their action or decision as betrayal, and there is a chance that you will fight because of it. You will be able to justify your loved one’s actions only after you think about the whole situation better.

To dream of trying to swim to the island
If you dream of trying to swim to the shore, it means that you will get forced to do something. You might have to do something you don’t like, travel, or move to another city or state. That change will be hard on you, but you will not have a choice considering that your existence, as well as the livelihood of the people you love, depends on your actions.

To dream about exploring an island
Exploring an island in a dream means that it is time for a change of scenery. You probably haven’t traveled for a long time, even though you are someone who truly enjoys it. You get bored being at the same place for a long time, and you are trying to escape somewhere else from time to time. You like exploring other cultures and customs and hanging out with strangers. Think about a short field trip that will help you recharge your batteries since you haven’t enjoyed your hobby for a while.

To dream of walking around an island
Walking alone around an island in a dream means that the situation you are in now confuses you. It can have something to do either with your private or business life. There is a chance that you like two people simultaneously, and you don’t know how to deal with it or who to choose. Another possibility is that your boss has offered you a promotion under specific conditions, and you don’t know whether to accept or reject it. Maybe you should ask for advice from someone you trust regardless of the nature of the problem.

To dream of buying an island
Dreaming of buying an island means that you are a pretty ambitious person. You have clear goals and will do anything to achieve them. You believe that failure is not an option and achieve much based on that. However, you often burn bridges behind you, which you could regret in the future. Ask yourself who you will celebrate success with once you acquire it.

To dream about receiving an island as a gift
If you dream of someone bestowing an island to you, it means that you are thinking about taking advantage of your appearance or influential acquaintance to achieve your goal. You probably want to get some specific results, and you will decide to take shortcuts to get there. There is nothing wrong with choosing a shorter path from time to time, but ask yourself what consequences your next move could bring. You know that people rarely do favors for free.

To dream of selling an island
Selling an island in a dream means that you have an inconvenient task. There is a chance that your boss will give you a complex project, or you will have to tell bad news to someone. Anyhow, you will be stressed out because you are not someone who deals with bad situations well. Perceive that as a maturity test and make sure to pass it.

To dream about bestowing an island to someone
A dream where you bestow an island to someone is a sign that you should watch out for how you spend money. You have been buying things lately that you will never need. It is nice to have the option to relax when it comes to finances, but your income might decrease in the future, which is why you should start thinking about it and save some money not to end up in trouble.

To dream of living on an island
If you dream of living on an island, it means that you need some time to get over something. We are probably talking about a loss of a loved one, heartbreak, or financial ruin. Anyhow, what you are feeling is entirely natural, and you can’t expect to recover overnight. One of your family members or friends will help you during that whole process.

To dream of a fire on an island
If you dream of an island engulfed in flames, it means that you panic too much in specific situations. You can make a molehill out of a mole. You don’t think straight when something switches in your head, but you start coming up with the worst possible scenarios. You have to deal with that problem because people are kind of tired of your outbursts.

To dream of a flood on an island
When you dream of a flooded island, it means that you will be in a risky situation, thanks to your reckless moves. If you don’t start thinking clearly about what you are doing and what decisions you are making, there is a chance that you will hurt yourself. Don’t be afraid to ask for help from the people you love if you can’t solve problems alone. Someone else’s advice or suggestion will help you realize what situation you are in now.

To dream about an earthquake on an island
If you experience an earthquake on an island, it means that you are at a crossroads. There is a chance that you are choosing between staying in school and getting a job. Another possibility is that you don’t know whether to keep an old job or accept a new one. You might have doubts about if you want to spend the rest of your life with a partner. Anyhow, you have to give yourself time to think about everything well. You might not regret your decision if it is based on long deliberation and analysis of all aspects of your problem.

The meanings of dreams can be a lot more trivial. If you have recently seen an island or traveled to it, it has left a strong impression on you.

Definition of an island

An island is a mainland surrounded by water on all four sides.