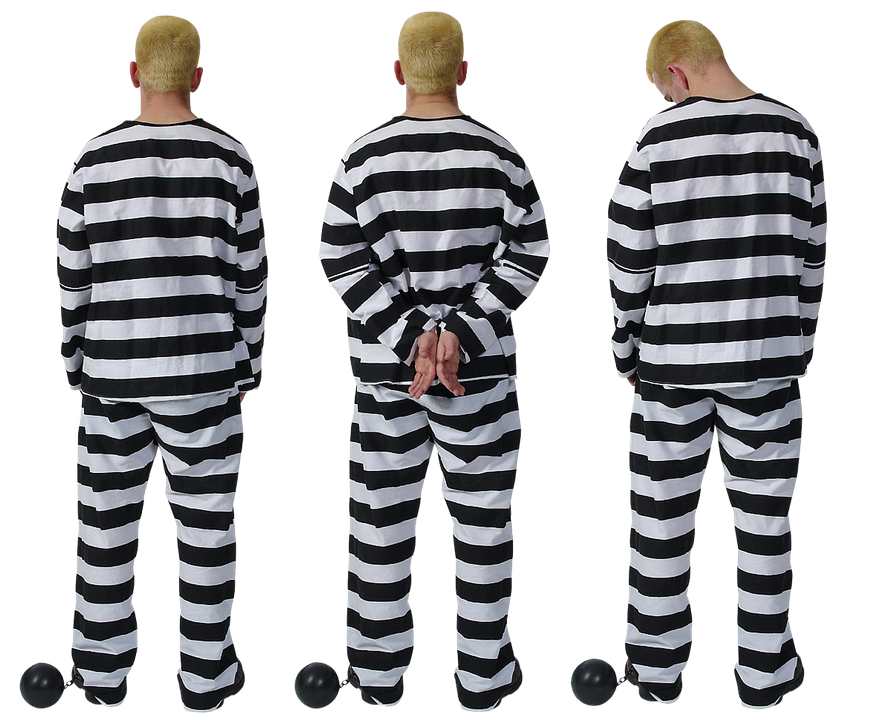 To dream of a convict
If you see a convict in a dream, it symbolizes immense worries. There is a chance that you will witness various scams and illegal activities in the following period, but you will not be allowed to do anything about it. You will have to think things through and ask yourself what you will risk if someone asks you to get involved in that, and you accept.

To dream of being a convict
If you dream that you are a convict, it means that you feel guilty. There is a chance that you are aware of the mistakes and injustice you have done, but you don’t have the courage to ask for forgiveness from the people you wronged. Even though others believe that you are heartless, only you know how much all of that hurts you, which is why you are starting to be self-destructive.

To dream of killing a convict
When you dream of killing a convict, it means that you will turn the page. You probably want to change something for a long time, but you always find an excuse to postpone it for later. However, you will realize that you will not achieve anything that way, and you will start working on fulfilling your dreams right away instead of torturing yourself with such behavior and actions that hurt you.

To dream of a convict running away
If a convict is running away in your dream, it means that someone will stalk you. We are probably talking about someone who you have cut out of your life, letting them know that they are not welcomed in it. That person will not accept it and will do everything they can to persuade you to change your mind and start over.

To dream about talking to a convict
Talking to a convict in a dream means that you have to be more open-minded and get rid of deeply-rooted stereotypes to learn something new and meet interesting people. You have clearly defined attitudes about many things, which is fine. However, most of them are not based on knowledge and experience but on assumptions. You are missing great life opportunities because of such a way of thinking.

To dream of other people talking to a convict
If you see or hear someone else talking to a convict in your dream, it means that you must be more understanding of your loved ones. You don’t like some of their decisions and actions, and you criticize them. However, you have chosen the wrong approach. You have to give them advice on what to change instead of commenting negatively on what they are doing. You know that the people you love will not change their opinions, so why wouldn’t you help them achieve what they want.

To dream of arguing with a convict
Arguing with a convict in a dream symbolizes communication problems. You are pretty nervous lately and have many worries on your mind. Instead of finding the right way to channel such negative energy, you take out your frustrations on other people. Your family members are the ones you should talk about the things that stress you out, but they can’t tolerate your outbursts forever. Imagine how you would feel if you were in their shoes.

To dream of other people arguing with a convict
When you see and hear someone else arguing with a convict, it means that you could end up in an uncomfortable situation soon. Two people you have recently met will have a heated argument and will accuse one another of various things. What’s more, they will ask you to get involved. Make sure you don’t become a part of it but let those people know that that their problem doesn’t concern you not to end up in trouble.

To dream of fighting with a convict
Fighting with a convict in a dream means that you have an unpredictable enemy or rival. There is a chance that you are fighting with a very cunning person for the spot in the company you want to work for. That person might not have the same level of knowledge and experience as you, but they will take advantage of other benefits. Unfortunately, there is no way to stop that, and you can only hope that your qualities will be more desirable than theirs to a potential employer.

To dream of other people fighting with a convict
If you see convicts fighting among themselves or someone else fighting with one, it means that your friend or one of the family members will complain about their job to you. One of the people you are close with can’t find a job or is not comfortable doing what they do. You will openly advise them to shut up and put up with it until something better comes up since they don’t have the luxury to choose now.

To dream of a convict attacking you
A dream where a convict attacks you implies that people from your surroundings will not like some of your actions or decisions. There is a chance that your family and friends will criticize you while others will talk behind your back. If you believe that you have made the right decision or move, you must not pay attention to that. However, if you think that those people are right, ask for advice on how to minimize the negative consequences of your actions.

To dream about attacking a convict
Attacking a convict in a dream means that you are pretty impulsive lately, which leads to making mistakes. That especially applies to the job you do. If your boss often scorns you for the trivial errors you make, it means that you are not focused on work, but your thoughts are wandering somewhere else. Maybe you should take a few days off to rest and recharge your batteries to get entirely focused on what you do.

To dream of running away from a convict
Running away from a convict in your dream means that you have invested a lot of effort into something unprofitable. You have probably dedicated your time, money, and effort to something that is not bringing wanted results. It might be hard to give up on it just like that, but you will soon realize that it is time to turn to more constructive things in life.

To dream of injuring a convict
Injuring a convict in a dream means that you will solve one problem temporarily. Just when you start to believe that you have gotten rid of the worry, something new will pop up. There is a chance that you don’t want to do anything radical about it, but you will not have a choice this time. You will have to make significant cuts to put an end to it once and for all.

To dream of a convict injuring you
If you dream of a convict hurting you, it means that you shouldn’t give up on your plan, even though you are currently facing numerous obstacles and challenges. You have to deal with them on the go to not waste too much time on them. A lot of patience and motivation only can help you finish that project.

To dream of releasing a convict
Releasing a convict from prison in a dream means that you believe that people can only change if they have a strong enough motive for it. You always give people who hurt or offend you a second chance because of it.

To dream about kissing a convict
Kissing a convict in a dream means that you will not let prejudices and other people’s opinions influence your decisions. You have been taking into consideration what others think about you and your actions or decisions for too long, but you have realized that you carry a weighty burden on your back. You will finally start living your life the way you want.

To dream of marrying a convict
When a single woman dreams of getting married to a convict, it implies that she doesn’t have luck in love. It sometimes seems to you that you continuously make wrong choices, and you are losing hope that your relationship status will change. However, such a way of thinking is entirely wrong because love could happen to you when you least expect it.

If a married woman dreams of getting married to a convict, it means that she doesn’t believe in a happy and peaceful future with her current partner and is actively thinking about getting a divorce.

If a single man dreams of marrying a female convict, it means that he likes someone unavailable to him for some reason. You might have feelings for someone taken, with whom a relationship is not possible.

When a married man dreams of marrying a convict, it means that his feelings for a partner are gone, and he fantasizes about someone else.

To dream of being on death row
To dream of getting the death penalty means that you believe that there is no solution to a problem that currently bothers you. However, you would realize you were mistaken if you talked about it with the right person.

To dream about your loved one on death row
This dream means that you are worried about a family member, partner, or friend. That person probably has a problem, but you don’t know how to help. Don’t underestimate the importance of the love and support you give them.

The meanings of dreams can be a lot more trivial. If you have recently seen a convict on TV or in person, it has left a strong impression on you.

Definition of a convict

A convict is a person that serves a prison sentence because of a felony they committed.