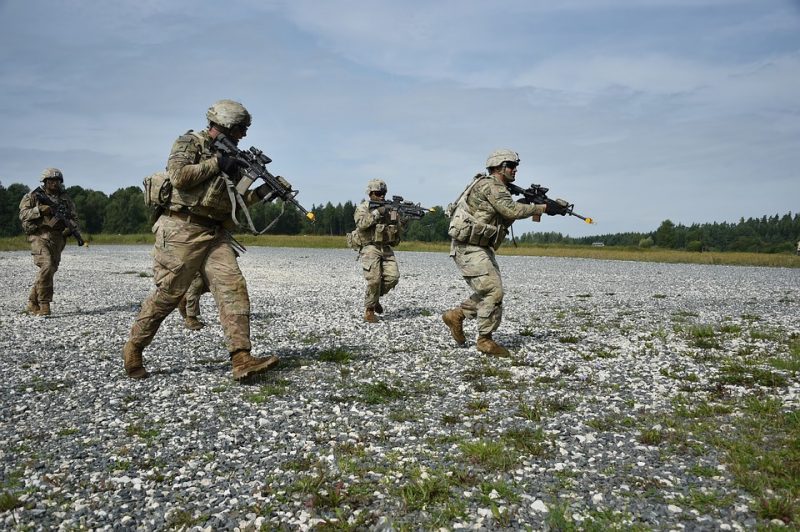 War and warfare are common motifs in dreams. If you have participated in war or survived it recently, or even if you have heard news regarding war, then those dreams shouldn’t be interpreted, because they are contaminated by previous or recent experience.

To see war in a dream
Dreaming of warfare symbolizes restlessness. It is possible that you are experiencing fights between family members, colleagues or friends too emotionally. That is affecting you, even though it has nothing to do with you, so you are not able to function normally out of fear that someone will leave your home or your company. It is possible that you are tormented with conflicts that are similar to war between good and evil inside of you. You are constantly torn between things you want and between people’s expectations. If you are at a crossroads regarding love and business relationships, you will have a hard time to figure out your choice. It is possible that you will close one door that you will not be able to open anymore. Whatever you decide, it will be late to cry over spilled milk. If your only fear is to disappoint other people’s expectations, you will realize that it would be the best to find courage and live the way you want, especially if you have to change your job, college or partner.

Dreaming of hearing about war on the news
When you are dreaming of hearing news about war, but you are not participating in it, that usually describes your personality. There are many things you would like to do in life, but for some reason you are afraid. People from your surroundings constantly criticize you for your lack of interest in life. That makes you even more dissatisfied, but your fear of failure and disappointment is stronger. You are afraid to take responsibility for your actions, as well as to face with their good and bad sides. You look at failure as some sort of tragedy, so you can’t dare to try things which could make you happy.

Dreaming of being at war with someone
If you are at war with someone in a dream, it implies that you love conflicts. You are a natural brawler that doesn’t stay quiet for anyone. You can’t calm down until you say everything you have on your mind, after which you feel satisfaction. You don’t let other people even think that they’ve silenced you, because you always find a way to defend yourself and attack others.

Dreaming of being called to join the war
If you receive an invitation to join war in a dream, it means that you have a conflict with the authorities. It is possible that you disagree with decisions people on higher positions than you are making. You will threaten them a few times, so it is possible that they fire you or even beat you. You will experience some kind of warning to retreat.

Dreaming of refusing to fight
If you are refusing to fight in a dream, it means that you let people do whatever they want. You are someone who is able to suffer a lot, in order to preserve peace in your home or at your job. Other people use that, so they allow themselves the luxury to do or say things to you that no one would usually tolerate.

Dreaming of causing war
Dreaming of causing war means that you should watch your behavior. You probably like to oppose your parents, so you can’t wait to fight with them. However, you will not feel good when they start fighting because of you and start blaming one another that they have made a mistake in raising you.

Dreaming of winning a war
This dream symbolizes failure. It is possible that a saying ‘If you hit the target, you have missed everything else’ will best describe your life at some point. Instead of feeling joy for achieving things you have planned, you will have a feeling that you’ve missed a lot and that you will fill the void you feel hardly.

Dreaming of losing a war
This dream symbolizes relief. You will probably realize that some people or things are not forth fighting for because they are not destined to you. You will let things happen on their own, while believing that you will meet someone who will be able to appreciate your effort and respond to it positively.

Dreaming of being wounded in war
This dream suggests that you won’t leave someone hanging. It is possible that you will help a friend realize their idea. Even though you are not supporting them completely, you will try to keep your opinion to yourself and not leave or judge them like everyone else.

Dreaming of dying in war
Dreaming of losing someone close to you in war or dying means that you’ve probably experienced traumas in the past that have left a deep scar in your subconsciousness. You will try to do activities that are helping you relax and deal with stress. If you ask someone for help, they will definitely advise you to star doing sports.

To dream that you are trapped in a war
Unfortunately, to dream that you have been captured in a war is not a good sign. Such dreams represent big challenges in real life. The following period will be very stressful, and you will need a lot of patience, strength, and courage to overcome it. Luckily, you can count on your loved one’s support, which will mean a lot to you.

To dream that your loved one got captured in a war
If you dream that your family member or someone you care about got trapped in a war, it implies that the person in question will soon ask you for help with one project. They might ask you for advice or a loan to solve one of their problems.

To dream about protesting against war
Protesting against the war in a dream means that you will stand up to injustice. You might have a chance to decide on someone’s future with a group of people. In your opinion, the majority will make an unjust decision, and you will decide to say something so that it doesn’t get adopted. However, you will get overvoted and have to look for ways to stop it from getting actualized.

To dream of reading about the war in a newspaper or book
When you dream of reading a book or newspaper article about war, it means that you will make a wrong decision because of a lack of information you have at your disposal. It is necessary to watch out for what you are signing in the following period and who you are making business deals with. If you are not careful, you could end up with the dirty end of the stick.

War or warfare is a conflict that includes an organized usage of arms and physical force by governments or other social groups.