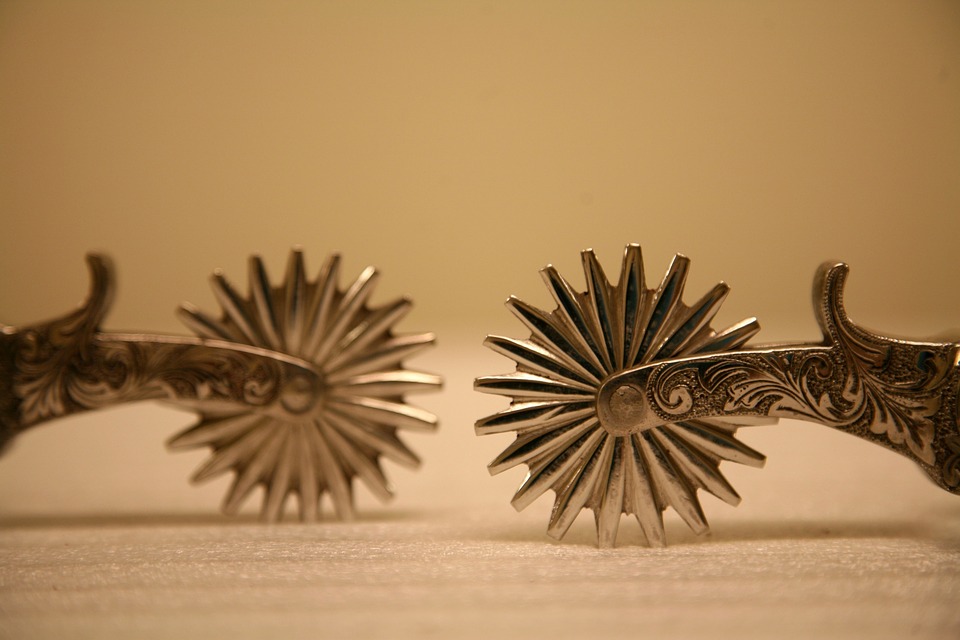 To dream of spurs
If you see spurs in a dream, it means that you don’t believe everything you hear. You think that everything should be triple-checked before you decide, which is why you recon that everything well not to have regrets later. Some people resent you for being too suspicious, but you choose to play it safe and check the correctness of every piece of information that reaches you.

To dream of putting spurs on
Dreaming of putting spurs on your legs means that you are ready for a fight. That can be related to business or emotional battles that you have with yourself or other people. You will be active in one of those aspects in the following period and get determined in your intent to succeed and achieve your goal.

To dream about silver spurs
When you see silver spurs in your dream, it means that you will protect someone. We are probably talking about a loved one who will come across misunderstanding and judgment from others from your surroundings. For some reason, you will justify every mistake that person made and will try to take them on the right path. That will be a difficult and ambitious task, and you will entirely dedicate your time to it.

To dream of golden spurs
Golden spurs in a dream symbolize wealth. However, that prosperity will get followed by many sacrifices, but you will realize that everything will pay off in the end. The wealth doesn’t have to be material but spiritual, as well, depending on what you believe the word means.

To dream of old and rusty spurs
Old and rusty spurs in a dream usually symbolize an upcoming change. There is a chance that you will quit your job, change a profession, retire, or move to another city or state. Getting out of your comfort zone will scare you initially, but you will still believe that your decision was the right one.

To dream about taking spurs off
If you dream about taking the spurs off, it symbolizes giving up. You have probably invested a lot of hard work, effort, and time into something that doesn’t bring results. You have a hard time admitting defeat, but you know that what you are doing at the moment will not give you the success about which you have fantasized. It is time to shift your focus to more valuable things in your life.

If you dream of taking someone’s spurs off, it means that you will have a chance to meet someone you have always admired. We are talking about someone you have heard and read many good things about, and you will be honored to pay your respects to them in person.

To dream about your spurs falling off while riding
This dream means that you can’t predict every situation that might happen to you. You are afraid of challenges and obstacles, which is why you are trying to notice them on time so that they wouldn’t surprise you. However, things happen unexpectedly sometimes, and you have to deal with them on the go. You ought not to look at it as something negative but as an opportunity to learn a lot from those events.

To dream of making spurs
Making or manufacturing spurs in a dream means that you are a skilled, intelligent, and capable person, but other people have more use of it than you. There is a chance that you invest a lot of effort into a job you do, but your boss doesn’t want to reward you. Think about starting your own business. That carries additional risk and responsibility with itself, but at least you will know for what you sacrifice yourself.

To dream of other people making spurs
When you see someone else making or manufacturing spurs in a dream, it means that someone will try to persuade you in their qualities in vain. You will meet someone who talks about themselves a lot, but you will not to see the concrete results of such bragging. You are a skeptic by nature, which is why people have to be really convincing to show you that they are worth your attention.

To dream of buying spurs
Dreaming of buying spurs means that you are not aware of the risk you are getting in. There is a chance that someone persuaded you to accept one job and that you have agreed to be a part of it without thinking about possible negative consequences of your decision beforehand. You must not let other people persuade you to invest your money into something you are not sure that has a bright future.

If you dream of buying old spurs on an auction, it means that you could regret spending your money on something that doesn’t do what it is supposed to. Someone will probably manage to persuade you that the product you are buying is worth the money you are willing to pay for it, but it will turn out that the situation is entirely different.

To dream about selling spurs
Selling spurs in a dream means that you will bury the hatchet with someone. You have been competing with a colleague or friend in everything for a while. You believe that you compete with one another, which is why both of you are trying to be better from the other side. However, you will soon realize that your battle is pointless and that you would achieve a lot more success if you worked together.

To dream of getting spurs as a gift
If someone bestows spurs to you in a dream, it means that you will unexpectedly gain respect and admiration from the public. You will do something you believe is right but won’t hope that it will cause such a reaction from others. There is a chance that you will even be honored or rewarded for that gesture.

To dream about bestowing spurs
Bestowing spurs in a dream usually means that you will meet an influential person who will help you achieve your goal. You will make sure to get closer to them to have a better chance of succeeding, thanks to your acquaintanceship. However, you have to be careful because no favor is free in the eyes of such people.

To dream of stealing spurs
Stealing spurs from someone in a dream means that you will take credit for a job that someone else successfully finished. You will see an opportunity and take it. However, you will not believe that you have done anything wrong, and that is why you will not understand why other people are criticizing you.

If you dream of stealing spurs from a shop or hardware store, it means that you will embarrass yourself in a large group of people. You will have a chance to talk to them about something you are not familiar with. In your desire to be an equal interlocutor in that debate, you will say something that will make others mock you.

To dream of someone stealing your spurs
When you dream of someone stealing your spurs, it symbolizes a minor expense. There is a chance that your car or one of the house appliances will break down, and you will have to give a specific amount of money for the repair. Another possibility is that you will be invited to a wedding, christening, or some other celebration and have to save money for an expensive gift.

To dream of finding spurs
Finding spurs in a dream usually symbolizes happiness. A loved one will probably gladden you with a beautiful gift, or you will get something you have fantasized about for a long time but didn’t have enough money to buy. The fact that someone remembered what you need, that is, what you have longed for a long time, will gladden you more than the actual gift.

To dream about losing spurs
Losing spurs in a dream means that one of your plans will fail. You have been planning a trip for a long time, but you will have to postpone it for objective reasons. That will sadden you, but you ought not to despair because a new opportunity will come your way soon.

To dream of repairing spurs
To repair spurs in a dream means that you are a very creative person, but you don’t take advantage of your potential enough. There is a chance that your job doesn’t ask for creativeness and innovativeness, which is why you should dedicate your time to a hobby. Your pastime could turn into a profitable business soon.

To dream of other people repairing spurs
When you see someone else repairing spurs in a dream, it is a sign that you shouldn’t underestimate other people’s abilities, especially if you didn’t have a chance to work with them in any way. You can’t let a perception of someone create a complete image of that person. Ask yourself what would happen if everyone made their conclusions based on assumptions.

To dream about throwing spurs away
This dream means that you will realize that you are too old for one job. There is a chance that you are tired of everyday obligations, which is why you will refuse to accept a new one. You will believe that younger and more capable people should take that project while you might be there for them if they need your help.

To dream of other people throwing spurs away
If you see someone else throwing spurs away, it means that you might get a promotion. A senior colleague will change their job or retire, and their position in the company will become yours. Even though you will be honored to take their place, you will have a great sense of responsibility and wonder if you are ready for that venture. However, there is no reason for worry because you are capable enough to do that job.

The meanings of dreams can be a lot more trivial. If you have recently seen spurs, it has left an impression on you.

Spurs are cogs with teeth used for encouraging horses to ride faster.