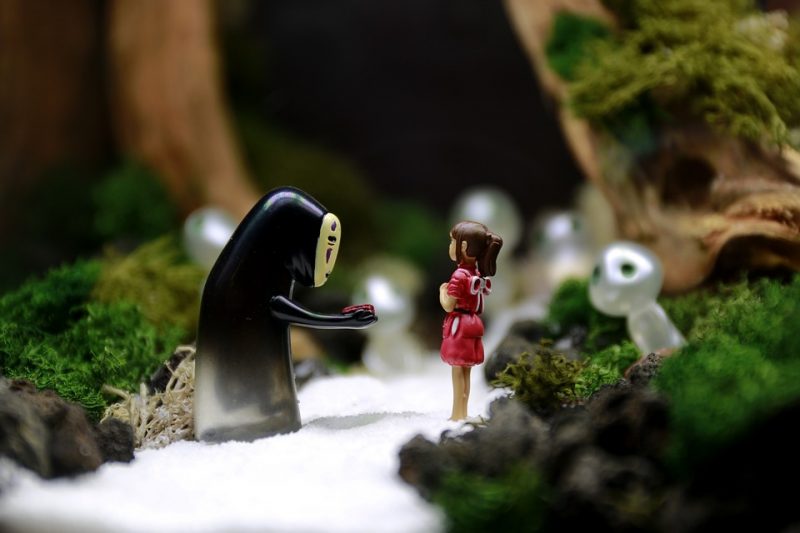 To see a specter in a dream
Dreaming of a specter means that someone will trick you. It is possible that you will experience an inconvenient situation at work, because someone will accuse you of something you didn’t do. You have stepped on your colleague’s or boss’ toes, and now they want to see you go. They will wait for you to make a mistake and then punish you harshly. You will have to be careful if you are working with money, so that you don’t have a deficit in the end. You will be under a lot of stress because of the problems you are facing with, so you will decide to stop that torture by yourself and find another job.

To talk to a specter or wraith in a dream
Dreaming of talking to a specter means that you are hiding your feelings. You are afraid of admitting that someone you are not in a relationship with is attracting your attention. It is possible that both of you are taken, which complicates the situation even more. You will try not to think of them, but passion you feel will overpower you. You probably have relationship or marriage issues, while that person is your shoulder to cry on and a support. By the time you become aware of the consequences that your feelings can cause, you will be too close and you will not be able to separate from each other.

Dreaming to have an argument with a specter
Dreaming of having an argument with a specter means that you are not fighting hard enough for your goals. It is possible that you have become lazy or that a failure has beaten you down. You have a hard time moving on and you set every idea you get to failure, right at the beginning. You are often using the easy way out. It is easier for you to complain and lament over your destiny than to do something.

Dreaming of other people having an argument with a specter
If someone else is having an argument with a specter in a dream, that means that your effort is in vain. You will try to change someone’s opinion about yourself, but you will not succeed in it. You will sometimes think that they are right about you and that you really are the person who they say you are. However, that will not last for long, because you know yourself the best.

To have a fight with a specter
Dreaming of having a fight with a specter means that you are your own worst enemy. Even though you often blame other people for your own failures and mistakes, you know that you are guilty of many things that have happened to you. It is possible that someone’s words will offend you, but you will know that they are right and that they are saying those things out of good intentions. You will ask yourself how have you put yourself in that situation and you will realize that your ‘invisible enemy’ is you. That will be the first step of your changing process. It is the best to start from small things and slowly come to bigger ones. Every small success will bring you satisfaction and give you strength to go forward.

Dreaming of other people fighting with a specter
If someone else is fighting with a specter in your dream, that symbolizes your fear for a loved one. It is possible that one of your friends is in big trouble. You don’t know how to help them, even though you have a strong desire. However, your hands will be tied, so the only thing you will be able to do is to be there for them.

To kill a specter
Dreaming of killing a specter means that you will solve a big problem. Something is worrying you for a long time. You are trying to solve it in every way you can, but the result is not visible. After you calmly think about everything and look at things from another perspective, the solution will show by itself. You have to have a lot of patience in order to overcome every challenge, which will pay off greatly in the end.

Dreaming of other people killing a specter
A dream in which someone else is killing a specter means that you could get a job offer that requires moving abroad. You will be afraid of change, but you know that is the best thing which is offered to you at this moment. Feelings are connecting you to your current dwelling place, but your reason is telling you not only to turn the page, but to start a new chapter as well.

To hide from a specter
Dreaming of hiding from a specter means that your consciousness is probably restless. You have made a mistake regarding your friend or a partner. You have lied to them so that they wouldn’t be disappointed in you. Even though you believe that is the best solution at the moment and think that the secret must stay hidden, your subconsciousness will not let you sleep at night. Even if you forget about it while being awake, dreams with similar meanings will torture you almost every day. Ask yourself is something worth your peaceful sleep.

Trying to hide someone from a specter
Dreaming of trying to hide someone from a specter means that you are afraid that you will lose a loved one. The communication with your partner is not the best. That is reflecting on every aspect of your life too. You are pretty dissatisfied with their actins as well, so you have tried many times to draw their attention to those actions. However, you didn’t receive a wanted answer, but an argument that started to go in the wrong direction. They started to blame you for mistakes you are making. You can hope that some things will change and try to work on your relationship, or decide to move on. It is up to you.

Running away for a specter
Dreaming of running away from a specter symbolizes hidden feelings. You probably like someone from your surroundings, but you have decided not to reveal it to them, because you are afraid that it could destroy your relationship. It sometimes seems to you that they have some feelings for you too, but you can’t be sure that you are not making it up. You are hoping that all of it is just a phase and that it will go away, but secretly you are fantasizing of having something more with them.

Dreaming of other people running away from a specter
A dream in which someone else is running away from a specter symbolizes good news. It is possible that you will get a chance to travel somewhere or change your dwelling place. This change will affect your body and mind positively. You will get some rest and charge your batteries for new challenges.

To kiss with a specter
Dreaming of kissing a specter means that you have a very low opinion of yourself. You don’t think that you are attractive, so you suspiciously look at anyone who approaches you. You have a hard time with making friendships and you hang out only with people who you know well and who know you. You would like to find a partner, but you are convinced that it will never happen. Let your friends help you, while asking for help from a professional wouldn’t be a bad decision either.

To dream of a specter in the woods
When you see a specter in the woods, it suggests that your courage will get put to the test. You like to believe you are a brave person and that challenges don’t scare you. However, you will soon experience something that will make you question if what you think of yourself is true. Something might finally make you get out of your comfort zone.

To dream of a specter in a well
If you see a specter in a well in your dream, it symbolizes an obstruction you could experience soon. Your coworker might try to ruin your reputation in your associates’ or boss’s eyes. Another possibility is that you will have a problem you have to solve with the help of institutions, and you will not get sympathy for it.

To dream about a specter in the cemetery
A specter in the cemetery in a dream symbolizes an adventure. You might soon decide to face one challenge. That especially applies to people who are not used to such situations. You will probably realize life is too short to wait for something to happen, and you will finally take matters into your own hands and start living your life to the fullest.

To dream of a specter underneath your bed
If you see a specter underneath your bed, it implies that you have to watch out for who you confide in. A person you have recently met might try to get closer to you to achieve their goals or interests through you. They will take advantage of your trust without wondering whether what they are doing is right. Because of this, it is necessary to talk about your secrets, plans, and fears only with the people you know well.

To dream of a specter on the window
When you see a specter in the window in a dream, it can mean you are paranoid. Some bad things have probably happened to you recently, but you didn’t connect that with your mistakes because you believe the universe is against you. When you take responsibility for the mistakes you make and learn something from them, your life will change for the better.

To dream about specters dancing
A dream wherein you see specters dancing suggests that you have wronged someone. You have probably formed your opinion of someone based on assumptions instead of specific knowledge or experiences. Only later will you realize you have made a mistake, so you will have to look for ways to apologize.

To dream of dressing up as a specter
If you dream of dressing up as a specter, it implies that you are trying to hide something from your loved ones. We are probably talking about a past sin you believed would hurt the ones you love. However, you have to remember that they will be even more hurt if they find out the truth from someone else instead of you.

To dream of someone dressing up as a specter
When you dream of someone else dressing up as a specter, it means you doubt one of your loved ones. You have probably noticed that your partner, friend, or a family member has been acting strange lately and think they are hiding something from you. You need not accuse that person of anything if you don’t have solid evidence that you are right.

If you have recently watched a horror movie, interpretations of these dreams are a lot simpler- what you saw has made an impression on you, so you have transferred it into your dreams.

Definition of a specter

A specter is a mythological being whose name usually represents ghosts, night bugbears and monsters.