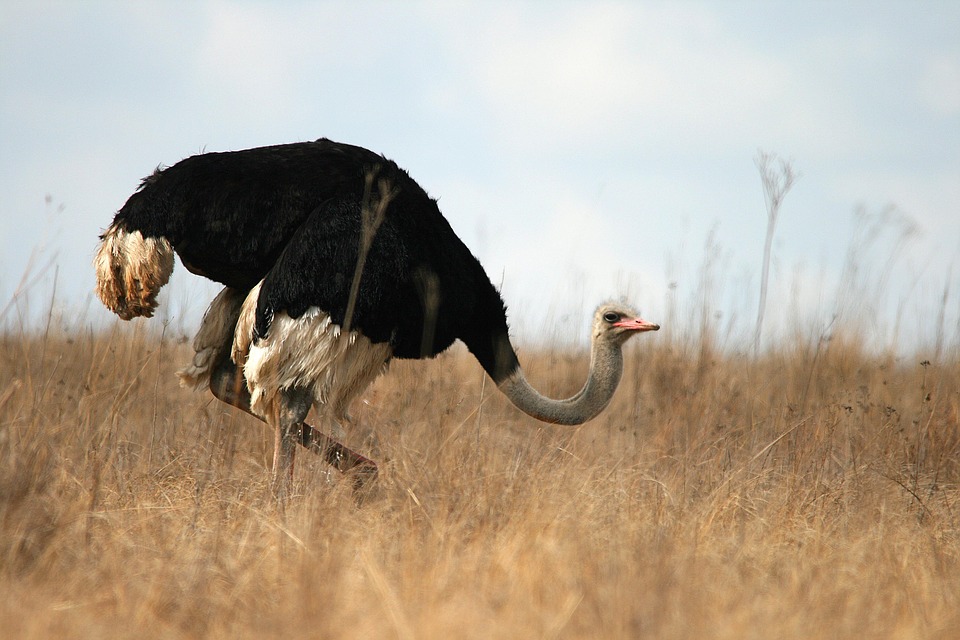 An ostrich symbolizes hiding and running away from the truth. It is one of the rarer dreams. If you have recently seen it in person or on TV, such dreams shouldn’t get interpreted then.

To dream of an ostrich
If you see an ostrich in a dream, it means that you hide from trouble. You are someone who has spent their entire life in the gilded cage, in which your family members have protected you from everyone and everything. However, you will get forced to face some problems in the future that you will have a harder time dealing with than your peers who have gotten exposed to them from an early age.

To dream of running away from an ostrich
If you dream of running away from an ostrich, it means that you will make the wrong person angry. There is a chance that we are talking about a boss or strict family member who doesn’t put up with anyone’s whims. You will be unpleasantly surprised since you didn’t expect such an aggressive reaction, after which you will get forced to act maturely and watch your words and actions.

To dream about feeding an ostrich
When you are feeding an ostrich in a dream, it means that you will lie to yourself. You will probably have hope that you still have a chance with someone you like, despite all evidence. You will go through the list of your virtues and compare them to the flaws of potential rivals who don’t stand a chance against you, in your opinion.

To dream of other people feeding an ostrich
When you see someone else feeding an ostrich in a dream, it means that you will get a compliment from someone you admire. We are talking about a person whose opinion matters to you a lot, which is why their praise holds a lot of weight. However, you ought not to let it make you arrogant or lead you to believe that you are better than you actually are.

To dream about other people running away from an ostrich
When you see someone else running away from an ostrich, it means that you will rejoice because of someone else’s shame. A person who thinks highly of themselves will probably get defeated by someone, and you will be happy because of it. You have to figure out why you think like that, that is, why you want to see them embarrassed if you don’t want to take revenge on that person.

To dream of running beside an ostrich
When you dream of running beside an ostrich, it means that you have big ambitions. You fantasize about some things whose realization asks for a lot of effort and time. There is a chance that you will invest a lot of both and sacrifice a lot to achieve something. However, you have to be careful when communicating with other people and don’t burn bridges to fulfill your dreams. You have to keep in mind that success built on other people’s misery is always short-lived.

To dream of catching ostriches
Hunting ostriches in a dream symbolizes a fascinating trip. You might decide to go on a short field trip with your partner, family, or friends, or you will finally visit a destination you have been dreaming about for a long time. Anyhow, it will be an adventure you will remember for years and retell it to everyone. A change of scenery and relaxation in the company of your loved ones will make you feel good.

To dream of other people hunting ostriches
If you see someone else hunting ostriches in a dream, it means that you will envy someone for the amount of free time they have. You will want to swap lives with them at least for a day to get some rest and regulate the amount of stress you feel at the moment. You have to take a few days off because the world will not stop if you decide not to do anything that day.

To dream about an ostrich flying
An ostrich flying in a dream symbolizes big success. You will soon fulfill your long-term wishes. There is a chance that someone you have recently met will help you with it since that person has influential friends or knows many people in the business world. You have to gain their trust because of it and show them that you are worth fighting for.

To dream of a baby ostrich
A baby ostrich in a dream suggests that you have to pay more attention to your loved ones. You are very strict or arrogant with them sometimes. You probably want to point out the mistakes they make that way and make sure they don’t repeat them, but you have to be more affectionate. Showing love and support is not a sign of weakness but proof that the people you love can count on you.

To dream of a flock of ostriches
A flock of ostriches in a dream suggests that you are confused by the situation in which you are. There is a chance that problems at work, the situation at home, or your relationship with a loved one stresses you out. It seems to you that one problem creates others, and you don’t know how to deal with that. You have to make a list of priorities and a plan about how to solve one thing at a time. You will be able to successfully deal with that crisis only if you organize your time well.

To dream about wounding an ostrich
Wounding an ostrich in a dream means that you will solve your problem only partially. You will probably think, at some point, that your worry has disappeared from your life forever, but you will soon realize that you were wrong. You ought not to panic and be stressed out because you will not achieve anything with that. Instead, make sure to find a way to get rid of the problem forever.

To dream of a wounded ostrich
If you see a wounded ostrich in a dream, it means that someone will take advantage of your kindness. There is a chance that you will help a person that will not show their gratitude but even ask for more from you. You will realize, at some point, that you have misjudged them and decide to cut every contact with them.

To dream about killing an ostrich
Killing an ostrich in a dream means that you will get on top of your laziness. That nasty trait has probably stopped you from achieving great success in life. You have often blamed others for your failures, but when you finally realize that you are the main culprit, everything will turn for the better. You have to snap out of it and get into action because you are the creator of your life, and the universe that you thought has conspired against you has nothing to do with it.

To dream of a dead ostrich
A dead ostrich in a dream can have two meanings. It symbolizes a decrease of energy, according to ancient dream books. You have probably fought something for a long time, and you are running out of patience, strength, and the will to finish it. Certain modern dream theorists interpret a dead ostrich as a sign that some of your problems will disappear by themselves.

To dream of eating ostrich meat
Eating ostrich meat in a dream symbolizes hope for a better future. You have probably gone through a stressful period that affected your mental health negatively. You have been recovering slowly, even though you have stayed optimistic. If you manage to stay in that mood, you can expect improvement in the future. It is important not to give up from fighting.

To dream about other people eating ostrich meat
This dream means that you will make an effort to help other people. Someone from your surroundings is going through an emotional or family crisis. You will make sure to support them and assure them that they can count on you.

To dream of an ostrich’s egg
An ostrich’s egg in a dream symbolizes a successful realization of an idea or plan. We are talking about something you have been thinking about for a long time but didn’t dare to risk it all and put that project into action. When you finally decide to do it, you will see that the results are better than you could have expected.

To dream of eating ostrich’s eggs
Eating ostrich’s eggs in a dream predicts immense joy. People who want to expand their families could fulfill their dream soon. On the other hand, there is a chance that a loved one who has had health issues will finally recover. Anyhow, something will truly gladden you.

To dream about an ostrich’s feather
An ostrich feather in a dream is not a good sign. It suggests that you will have to deal with dishonest people. Someone will try to persuade you into something using lies. You have to be very careful because of it and watch out for those whose intentions are not pure.

Interpretations can differ depending on what color an ostrich is in your dream.

To dream of a white ostrich
A white ostrich in a dream symbolizes happy moments. There is a chance that you will get invited to a wedding, christening, or some other celebration, at which you will have a great time. You will be surrounded by the people you love, while the atmosphere will be so good that you will talk about that event for a long time.

To dream about a black ostrich
A black ostrich in a dream can suggest an upcoming trip. You might have to travel for work, or you will visit a city or country that has always fascinated you as a tourist. Another possibility is that you will finally, after a long time, manage to go on a vacation.

The meanings of dreams can be a lot more trivial. If you have recently seen, fed, or ran away from an ostrich, it has left an impression on you.

Definition of an ostrich

An ostrich is the biggest bird in the world. It lives in Africa and doesn’t fly.