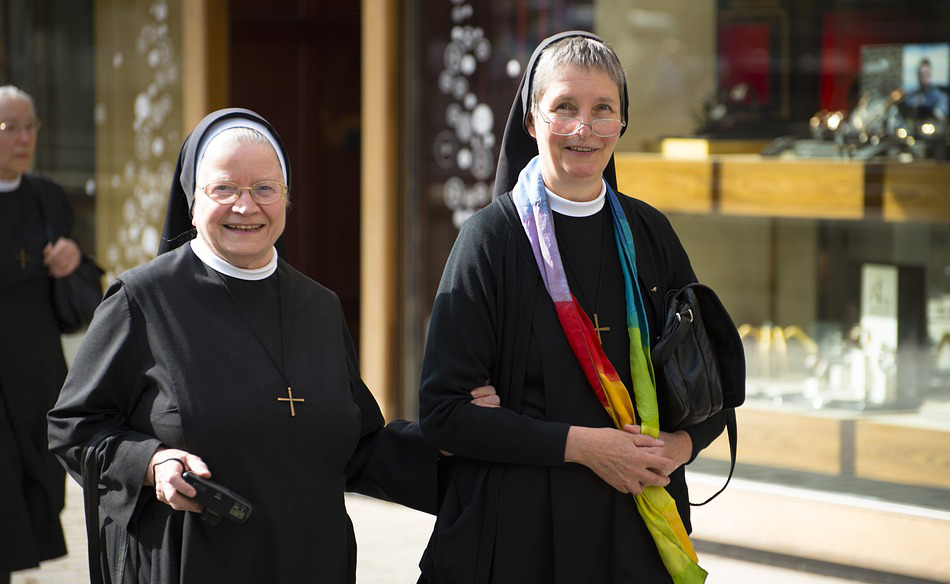 Interpretations of dreams with motifs of a nun depend on the context in which they occur and the details that follow them.

To dream of a nun
If you see a nun in a dream, it means that you are consciously sacrificing something for the wellbeing of your family, kids, parents, or partner. Another possibility is that you will sacrifice yourself to defend someone’s honor. You will take responsibility for someone’s bad decisions and actions to clear that person’s name.

To dream of nuns
If you see multiple nuns in a dream, it means that someone’s mental strength and stability will amaze you. You will probably meet someone who had a tough life but managed to find a way to fight for everything they wanted. Once you hear that person’s story, you will realize that your problems are nothing compared to theirs and that you don’t have many reasons to be dissatisfied with your life.

To dream of nuns praying
When you see nuns praying in a dream, it means that you are too emotional. You let even trivial things hurt you. You often react violently in situations that don’t require such behavior. Your loved ones are worried about you because they don’t know how to approach you. The fact that you take your frustrations out by arguing with everyone can only bring problems to you and your family in the long run.

To dream of praying with nuns
If you are dreaming of praying with nuns, it means that you will amaze someone with your modesty. There is a chance that you do your job great but don’t want to brag about it. That could attract the attention of business associates who could offer you a better job position. On the other hand, your modesty could help you seduce a person of the opposite sex, so there is a chance that someone will tell you how they feel about you soon.

To dream of talking to a nun
A dream in which you are talking to a nun means that you will ask for someone’s advice to solve a moral dilemma. You are probably at a crossroads in life and don’t know which path to take. It is time to talk about it with someone you trust. That person’s advice could help you solve some of your problems more easily and quickly.

To dream of other people talking to nuns
If you see someone else talking to nuns in your dream, it means that your behavior worries the people that love you. You might have made some risky decisions or have done something that surprised your loved ones. They have probably tried to talk to you about it, but you strongly believe that your actions are right and don’t want to listen to them.

To dream about arguing with a nun
Arguing with a nun in a dream means that you are stubborn. That trait of yours leads to conflicts with your loved ones or even the people on who your existence depends. You can’t stand criticism and don’t like when others comment on your work or behavior. Many people respect you because you are a hard-working and persistent person, but they don’t like your temper at the same time, as well as the habit to solve every problem you have with an argument.

To dream of other people arguing with a nun
When you see or hear someone else arguing with a nun in your dream, it means that you will witness or even participate in a great injustice. You will have a chance to decide on someone’s destiny with a group of people. All of you will make an unfavorable decision by voting, but you will decide to stand up to it. However, you will be outnumbered, which will stop you from doing anything big. Your consciousness will be restless for a long time because you couldn’t change the decision, which is why you will decide to take matters into your own hands.

To dream of fighting with a nun
Fighting with a nun in a dream means that you will wrong someone. You will probably accuse a colleague or friend of sabotaging or betraying you. You will not want to hear their side of the story because you will strongly believe that you are right. Time will tell that you have made a huge mistake, but it will be too late to do anything about it.

To dream of other people fighting with a nun
A dream in which you see someone else fighting with a num means that you lack the courage to face one problem. You are pushing it under the rug all the time, hoping that someone else will deal with it or that it will solve itself on its own. The longer you wait, the bigger the problem will get. It is time to get your head out of the sand and face it. You will probably have to make some difficult and big decisions, but that is life, right?

To dream of chasing a nun
Chasing a nun in a dream means that you will embarrass yourself in front of a large group of people. There is a chance that you will participate in a conversation about a topic that you don’t know anything about. In your desire to be an equal interlocutor, you will say something that will make other people mock you. That will help you realize, once again, that it is better to be quiet sometimes than to talk about something you know nothing about.

To dream about other people chasing a nun
When you see someone else chasing a nun in your dream, it means that you will protect someone. You will see that others are attacking that person and decide to put a stop to it. They might have good reasons for it, but you don’t like it when the fight is unfair, and you will take the weaker’s side. There is even a chance that you will gain enemies because of that, but you will not regret your actions.

To dream of running away from a nun
Running away from a nun in a dream means that your consciousness is restless because of something you did in the past. You have probably done something you are not proud of today. Instead of fixing it, you have decided to hide your sin. However, you are still thinking about it, but now you have an additional problem – the fear of people whose opinions you care about finding out about it.

To dream of kissing a nun
If a man dreams of kissing a nun, it means that he has a problem fulfilling his sexual fantasies. You are probably ashamed of admitting to your partner what attracts you, which is why you are dissatisfied with your love life. If you have been in a relationship or married for a long time, you shouldn’t be afraid of your loved one’s reaction because that person knows you well enough. However, if you have recently started your relationship with that person, maybe you should wait with your confession so that you wouldn’t scare or chase that person away.

To dream of marrying a nun
Dreaming of getting married to a nun means that you fantasize about someone unavailable to you. Someone from your surroundings probably attracts you, but that person is either in a happy relationship or marriage. You know that you don’t have a future with them, but you can’t stop thinking about that person.

To dream about killing a nun
Killing a nun in a dream symbolizes excessive possessiveness. You expect too much from people that love you. You believe that they will always be there for you, no matter what, and take them for granted. You also expect your loved ones to put your wishes and needs before theirs. You have to know that you are smothering those that love you with your behavior. You should give them space and time to dedicate attention to themselves, and then you.

To dream of a dead nun
This dream means that you lack originality. You are copying other people’s ideas and beliefs at the moment because you don’t have your own. It is time to figure out what you want and find a way to get it. Make a plan and do everything you can to achieve it. You can’t let challenges and obstacles discourage you on your way to success.

To dream of a nun’s ghost
A nun’s ghost in a dream suggests that you are stressed out. You have to find a way to channel that as soon as possible if you don’t want to seriously jeopardize your mental and physical health. Make sure to figure out what you enjoy and dedicate your time to that. Doing a hobby that brings you satisfaction would do you good.

The meanings of dreams can be a lot more trivial. If you have recently seen a nun in person or on TV, that has made an impression on you. This dream shouldn’t get interpreted in that case.

Definition of a nun

A nun is a person that practices religious asceticism, that is, conditioning of the mind and body in favor of the spirit by either living in seclusion and solitude or with a number of like-minded people while always maintaining a certain degree of physical separation from the people that don’t share the same goal or purpose.