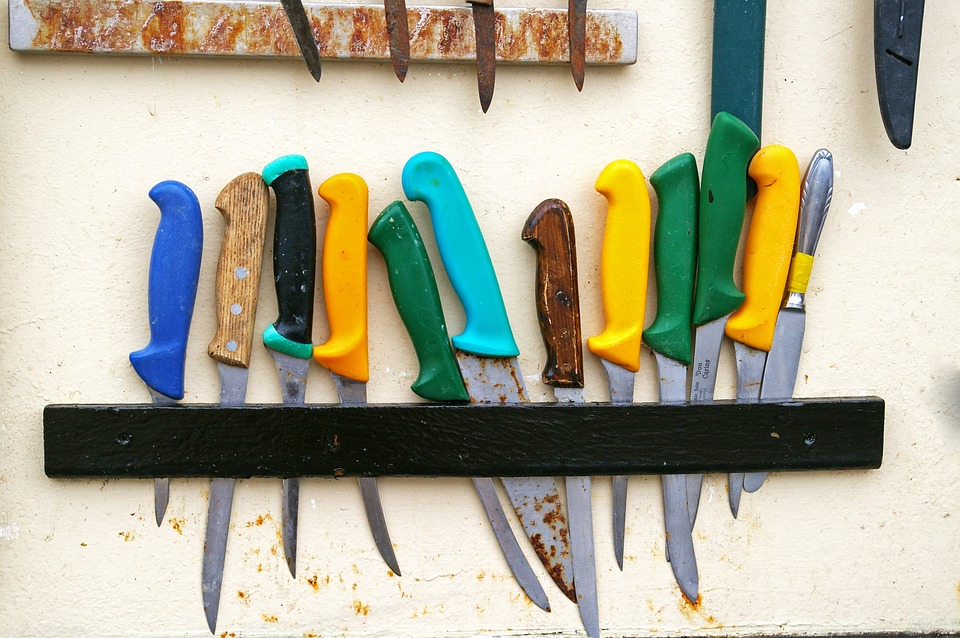 To dream about a big knife
If you see a big knife in a dream, it symbolizes a lie. There is a chance that you will want to protect someone by saying to that person what they want to hear instead of what the objective situation is. You will firmly believe that you are doing a good deed, but it would be more helpful for that person if you were honest from the start.

To dream of a small knife
Dreaming of a small knife means that you will argue with someone. We are probably talking about a person you appreciate and respect, even though you can’t find a mutual language. That can be your partner or a family member you disagree with, but you complain as soon as you are away from them a bit longer.

To dream of a pocket knife
When you dream of a pocket knife, it means that someone will stalk you. You don’t have a filter on your mouth and say whatever is on your mind. You protect yourself that way because you don’t want to be a poltroon who will do whatever people expect from you without saying anything, although you don’t think that what you have to do is right.

To dream about losing a knife
If you lose a knife in a dream, it symbolizes an unpleasant surprise. There is a chance that you will plan to say everything you think to someone’s face, stating facts that confirm your claims. However, you will be bewildered when you realize that not everything is black or white and that there are many other shades you didn’t notice.

To dream of finding a knife
Dreaming of finding a knife means that someone will gladden you. There is a chance that you will get something that has a special place in your heart and that you have wanted for a long time. You will be honored to have it and will do your best to preserve it as much as possible.

To dream of a rusty knife
If you see a rusty knife in a dream, it warns of sickness. You probably won’t notice that something is not right with your health, but a detailed checkup could face you with the danger that lurks around you. Even though you will pretend that you are strong and fearless, you will only want someone to hug you and tell you that everything will be OK.

To dream of a very sharp knife
A very sharp knife in a dream means that a loved one could disappoint you. A gesture or action of your family member, partner, or friend will hurt you. You will perceive that as betrayal and will need a lot of time to forgive them.

To dream about a blunt knife
A blunt knife in a dream means that you are not wise or strong enough to deal with one problem. Maybe you should ask for advice from someone you trust. A fresh perspective on the whole situation and that person’s experience could help you overcome that situation.

Another possibility is that you are not efficient enough in what you do currently, which frustrates you. You will have to reorganize yourself to get better results, thanks to your hard work and effort.

Specific dream books define a blunt knife as unreadiness to protect yourself from continuous attacks from your enemies.

To dream of a bloody knife
A bloody knife in a dream has multiple meanings, as well. Such dreams represent a guilty conscience because you have hurt someone you love. Another interpretation of the dream is that you are afraid that your past sins will backfire on you, or you will successfully overcome one difficult phase in life and solve a big problem.

To dream of a knife set
When you dream of a knife set, it symbolizes a moral or emotional dilemma. You probably didn’t admit to someone how you feel because you are afraid that it could hurt them. One thing is for sure – you will hurt that person more by staying silent and distancing yourself from them than the truth would. You ought not to postpone the inevitable but face it like a grownup.

To dream about holding a knife
Holding a knife in a dream symbolizes your need to defend yourself from the attack. Someone is probably provoking or underestimating you continuously, but you don’t react the way you should. Instead of ignoring such things, you often think about what you would say to that person if you stooped to their level. One thing is for sure – you will not achieve anything by arguing but only boost their ego and make yourself feel even worse.

To dream of other people holding a knife
If you dream of someone else holding a knife, it means that one person from your surroundings controls or restrains you. That can be your parent or a possessive partner who stops you from expressing your opinions freely. You will not be able to put up with that for long, and you will explode at the wrong moment. You have to solve that problem before it is too late.

To dream of cutting yourself with a knife
Cutting yourself with a knife symbolizes bad habits and vices that affect your life negatively. You know that your behavior is jeopardizing your health, but you can’t change it. You are probably still not ready to cut bad things out of your life, but you will realize with time that you don’t have another choice and will start taking care of yourself.

To dream about attacking someone with a knife
Attacking someone with a knife in a dream means that you would risk everything you have for your loved ones or some ideas. Family, honor, and respect are very significant to you. You would never do anything to jeopardize the ones you love or betray your beliefs. The burden you carry is weighty, but you will deal with it for the rest of your life.

To dream of someone attacking you with a knife
A dream where someone attacks you with a knife symbolizes a fear of loneliness. You want to keep your loved ones by your side at all costs, even when you know that your love relationships or friendships don’t have a bright future. Think well if it makes sense to fight for something set to failure. It might be time to let some people go out of your life forever.

To dream of stabbing someone with a knife
Stabbing someone with a knife in a dream can have multiple meanings. One of them is that you envy someone and would rather see that person fail than succeed in something. You can’t let such negative emotions lead you through life. You have to focus on yourself and work on being a better person, but don’t compare yourself to others.

To dream about someone stabbing you with a knife
This dream means that you have a very cunning enemy or rival. You never know where you stand with that person, which stops you from defending yourself the right way. If you managed to see through that person’s intentions, they couldn’t hurt you. You ought not to make impulsive decisions because that will bring you more harm than good.

Another meaning is that you will notice that your close friend is jealous of you and wants to hurt you.

To dream of buying a knife
Dreaming of buying a knife means that you are very confident. It is admirable that you respect yourself and everything you have achieved, but you must not underestimate others because of it. You may be better or more successful than some people, but you don’t have to show it on every occasion.

To dream of selling knives
Selling knives in a dream means that someone will humiliate you. There is a chance that one person will minimize your success or criticize what you do in front of everyone. You will not say anything, but that will bother you for a long time. You will think about what you should have said as long as you don’t realize that their words don’t matter.

To dream of sharpening a knife
Sharpening a knife in a dream means that you will deal with a delicate problem. You will doubt yourself and have a hard time achieving results because of it. Everything will flow more smoothly when you persuade yourself that you can succeed.

To dream of other people sharpening a knife
When you see someone else sharpening a knife in a dream, it means that you will sacrifice yourself because of others. You will probably miss a great life opportunity to be with the ones you love. You will later wonder what would happen if you acted differently, but you will try to push such thoughts to the back of your mind.

To dream about washing a knife
Washing a knife in a dream means that a small problem could turn into an immense worry if you don’t face it now. Stop shoving your head into the sand and deal with what scares you. You will see that things are not as bad as you have imagined.

To dream of other people washing a knife
If you see someone else washing a knife in a dream, it means that decisions made impulsively bring negative consequences sooner or later. Get ready for many problems and challenges. You will overcome them only if you stay motivated, patient, and persistent.

To dream about stealing a knife
Stealing a knife in a dream means that you are a very ambitious person who believes in a saying – the end result justifies the means. You don’t care how many bridges you will burn as long as you get what you want.

To dream of someone stealing your knife
When you dream that someone stole your knife, it means that you could become the victim of someone’s ambition. You have to choose business partners carefully and avoid getting involved in risky deals. That is the only way to get out of some situations unscathed.

The meanings of dreams can be a lot more trivial. If you have recently seen, found, or lost a knife, it has left an impression on you.

Definition of a knife

A knife is a tool that consists of a blade and a handle. It gets used for cutting things.