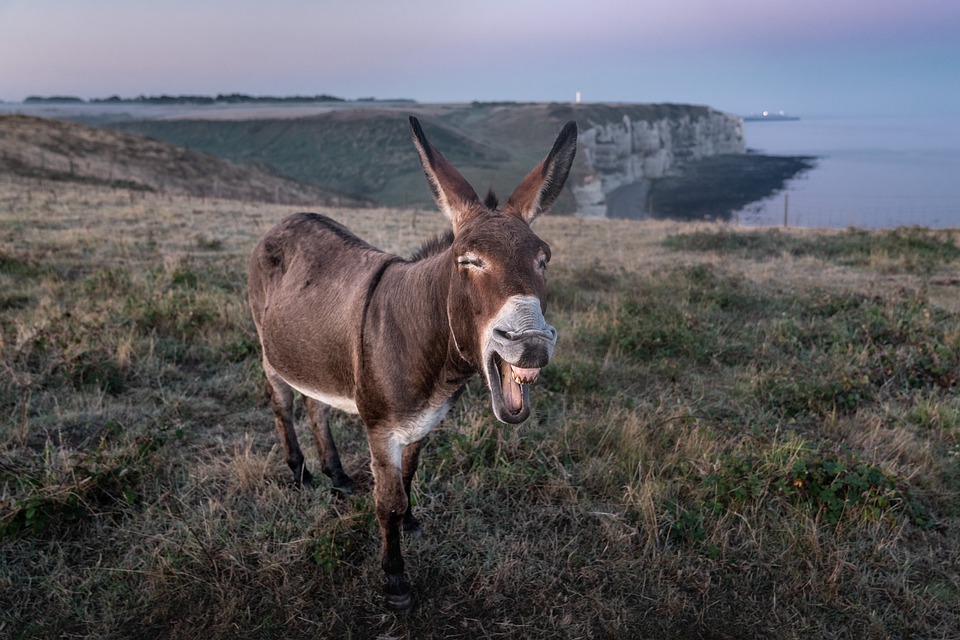 Heehawing in a dream has negative connotations and warns that someone will gossip about you. It is a rare dream. If you have recently heard a donkey heehaw, such a dream shouldn’t get interpreted.

To dream of heehawing
If you are heehawing in a dream, it means that you overestimate your abilities. You will probably claim that you know many things you have never worked with to leave a better impression on the people from your surroundings. However, you will create a countereffect because you will not show it in action, which is why no one will believe anything you say anymore.

To dream of other people heehawing
If you hear someone else heehawing in a dream, it means that your conscience is at peace. You know that barking dogs seldom bite, which is why you don’t care when you hear that someone is talking badly about you. You make an effort to do what you think is right and stand firmly behind your actions and every word you say.

To dream of someone heehawing after you
A dream wherein you hear someone heehawing after you means that you will be the target of gossips. Some of your actions or decision will become the main occupation of the people around you. Not only will they talk about you but add juicy details to make the story even more fascinating. The worst you can do is to go around denying the rumors. You will only prolong the agony that way, but you will not stop the gossips spreading around. You have to be patient, and the whole saga will end on its own.

To dream about someone calling for you by heehawing
This dream means that you will have to deal with rude people. Someone will try to provoke you with their behavior. They will want to cause a violent reaction to embarrass you in front of other people. Instead of letting them do it, you have to make an effort to respond with a smile. If you acted differently, you wouldn’t feel better, and that person would achieve their goal.

To dream of calling for someone by heehawing
Calling for someone by heehawing in a dream means that you will stoop to someone’s level and feel bad about it. People often criticize and throw jabs at you because of your actions. They underestimate your success and don’t take it seriously. You will not want to put up with it anymore, which is why you will rebel. Only later will you regret letting petty people provoke you. Let that be a lesson on how not to behave in the future.

To dream of responding by heehawing
Responding by heehawing in a dream means that you believe that some people don’t deserve your attention, love, or respect. We are talking about people who have become a part of your family, but you don’t have mutual interests. Considering that they don’t respect you first, you believe that you shouldn’t do it as well. You will not say anything to some inappropriate comments, but your conscience will be restless when you stay alone. You will wonder why you are thinking about it if you have concluded that you don’t care about those people at all.

To dream of someone responding by heehawing
If you dream of someone responding by heehawing, it means that you will have a hard time accepting criticism. Someone will probably point out the mistakes you are making, and you will perceive it as their attempt to humiliate you. There is a chance that vanity doesn’t let you see things the way they are.

To dream of communicating by heehawing
If you dream of noise like heehawing coming out of your mouth instead of words, it means that you have to control negative emotions or at least find a way to channel them. You are capable of arguing about the littlest things lately, which is why your relationship with people close to you is disastrous. You have to stop taking out your frustrations on them to fix that.

To dream about other people communicating by heehawing
This dream means that you will be the victim of someone’s nervousness or frustration. Someone will attack you out of nowhere, and you will not know how to react. The worst you can do is to argue with that person. Instead, you should wait for them to say everything they have and calm down, and then you can respond and point out their mistakes.

To dream of hearing heehawing over the phone
When you dream of someone heehawing over the phone, it means that you will be angry with a loved one. Your partner, friend, or family member will do or say something that will offend you. Their intentions are not bad, but you will not be able to see it right away and in the heat of the moment. You have to let them explain their actions and make conclusions only then.

To dream of a donkey heehawing
A dream wherein you see a donkey heehawing symbolizes business success. There is a chance that you will make progress in your career or that your boss will increase your salary. Another possibility is that you will get a good business offer and accept it. That will open new doors in the business world for you, and you might even decide to start your own business with time.

To dream of multiple donkeys heehawing
Hearing multiple donkeys heehawing simultaneously in a dream means that you ought not to pay attention to the criticism when it comes to business, especially coming from the people who know nothing about it. You are good at what you do, and you have to believe in your success. Your way of thinking is correct, and you can’t let the things that other people say hurt you much.

To dream of teaching a donkey to heehaw
Teaching a donkey to heehaw in a dream means that you will argue with a stubborn person. You will have a debate with someone who has entirely different attitudes than you. Instead of dropping it when you realize that the discussion is not going anywhere, you will decide to continue pushing. That could soon turn into a heated argument and be the end of the communication between you and that person. Because of it, you have to know when to let it go so that the same scenario wouldn’t happen again.

To dream about other people teaching a donkey to heehaw
A dream wherein you see someone else teaching a donkey to heehaw means that you will end in an uncomfortable situation. There is a chance that you will witness an argument between two people you have recently met. Your presence will not bother them to accuse one another of various things. What’s more, they will even try to drag you into it. You will avoid that only if you state that you don’t want to be a part of their conflict right away.

Try to remember the details that followed your dream or the feelings it evoked in you to get as precise interpretations as possible.

To dream of heehawing waking someone else
This dream means that you will be someone’s shoulder to cry on. There is a chance that one of your family members or friends will experience love or business wreckage, and they will come to you for support and comfort. You ought not to reject that person because you can’t stand to listen to someone’s complaints. We are still talking about someone who has always been with you during beautiful and bad moments in your life.

To dream of heehawing scaring you
When you dream that heehawing scared you, it means that you panic. You are capable of making a mountain out of a molehill. You don’t care what people tell you to do during such moments because you think about the worst possible scenarios. You have to learn to control yourself because such behavior could seriously jeopardize your mental health.

To dream of heehawing gladdening you
If you dream that heehawing gladdened you, it means that you will travel. That can be a business trip or a visit to friends and family who don’t live in the same city or state as you. Another possibility is that you will finally visit a destination you have always fantasized about. A change of scenery will suit you, and you will face new life and business challenges more easily later.

To dream that heehawing made someone else cry
When you see a child or grownup crying because of heehawing in a dream, it means that you will witness someone’s emotional breakdown. We are talking about a person that seemed tough and courageous to you. That will help you realize that they are only human after all.

The meanings of dreams can be a lot more trivial. If you have recently heard heehawing, it has left an impression on you.

Heehawing is a donkey’s loud cry.