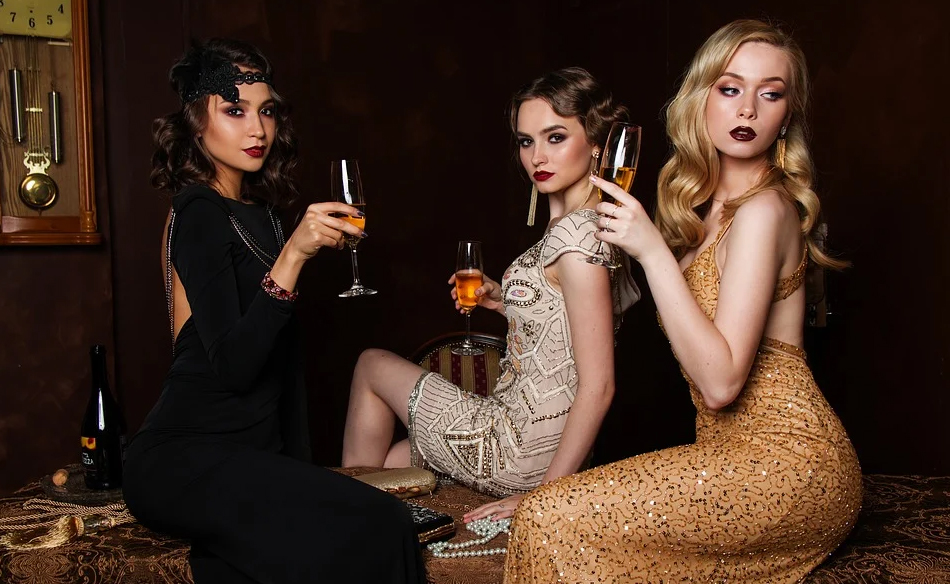 To be glamorous in a dream
If you are dreaming of being glamorous, that is a warning to stop acting recklessly. Your requirements are probably not in accordance with the reality and money you have for spending. You are doing your best to live a lavish life and to be accepted by people that society finds successful and influential. You are putting an accent on your physical appearance that is your main trump for making new acquaintanceships at the same time. If you continue acting like that and spending more that you make, you will probably fall in debt that you will have a hard time recovering from.

To dream of other people being glamorous
When someone else is glamorous in your dream, it means that you fall under other people’s influence easily. You probably believe that people have fewer problems than you and that they have an easier time dealing with difficulties. You find idols easily and imitate many of their actions. As soon as you like someone, you give all of your trust to them without fear that they could misuse it. Also, you get disappointed easily after you realize that people you idolize are not perfect and that they make mistakes like everyone else. You don’t learn from your mistakes but see them as the biggest obstacles in most of your love relationships or friendships.

To dream of a glamorous woman or girl
If a woman dreams of a glamorous girl, it means that she lacks self-confidence. You don’t like something about yourself, and you believe that you can’t change it, even though you have never even tried. If this relates to weight problems, everyone can work on that. If, however, you have some sort of physical deformity, try to accept it and find a way to love all of those traits you find unattractive. That will create balance in your life, and you will not feel bad.

If a man dreams of a glamorous woman, he probably feels threatened because of his partner, colleague, or some other female in his surroundings. Some men are afraid of courageous and capable women because they often see them as a threat. Because of it, they choose more sensitive and affectionate partners but dream of women who sweep them of their feet.

To dream of a glamorous hairdo
When a woman dreams of having a glamorous hairdo, it means that she cares a lot about what other people think of her. She never leaves the house without makeup or with a bad hairdo, while lipstick is a necessary item in her purse. She loves when people say that she is always glammed up.

If a woman dreams of someone else having a glamorous hairdo, it means that she envies another woman on something. The most common reason is a better, more emotional, and affectionate partner.

If a man dreams of a glamorous hairdo, it means that he should finally accept the fact that he enjoys beautiful things, no matter if only women are interested in them or if both sexes find them attractive.

To dream of a glamorous dress
If a woman dreams of wearing a glamorous dress, it means that she will probably make an effort to seduce a mysterious man that she has liked for a while. She is especially attracted to him because he doesn’t pay attention to her, which makes the challenge even bigger.

If, however, a woman dreams of someone else wearing a glamorous dress, it means that she envies someone on success. Someone has achieved everything that you have dreamed of. Instead of being motivated by them, you see them as a threat.

A dream in which a man wears a glamorous dress means that he is afraid that he will look ridiculous if he admits to one woman that he likes her. Those thoughts are deeply rooted in your brain, probably because you have been rejected many times before. All of that is resulting in the lack of self-confidence and self-respect that you are reducing even more with your behavior.

To dream of a glamorous wedding dress
When a woman dreams of wearing a glamorous wedding dress, it means that she cares about materialistic things more than about spirituality. She will quench her sorrow with a new piece of clothes better than crying on her friend’s shoulder about her destiny. You love life, and you use every opportunity to enjoy it your way.

If a woman sees someone else wearing a glamorous wedding dress in a dream, she will probably get a good job offer that she will have a hard time refusing. That, however, asks for moving abroad, which could be a problem in her case.

If a man dreams of wearing a glamorous wedding dress, it means that he should stop meddling in his partner’s business moves and dedicate his time to the things he is the best at.

To dream of a glamorous wedding
When you see your glamorous wedding in a dream, it means that you are very competitive. You are someone who likes to win by nature, and you are the happiest when you manage to show everyone that you are smarter, better, or more successful than everyone else. You often share your success on social media and hope that all of it will spark at least a bit of envy in your subscribers.

If you are dreaming of being present at someone’s glamorous wedding, it means that you will find out that a person who attracts you for a long time is in a relationship. That information will truly hurt you, so you will decide to never fall for someone in the future who already has a partner.

To dream of a glamorous dinner
A dream in which you are attending a glamorous dinner is a message to stop pretending that you are someone that you are not. You have started to overdo it in your intent to show yourself in the best light possible. You forget that some people met you when you were just a regular person and that your behavior is disgusting to them. Your arrogance causes laughter among other people.

When you are preparing a glamorous dinner in a dream, it means that you are hoping that your crush will finally notice you. You secretly like someone who is not giving signs of having the same feelings for you. You have let them know subtly that you are interested in them a few times already, but you didn’t get a reaction. You should maybe give up on it.

To dream of a glamorous party
If you are attending a glamorous party in a dream, it means that you will hear bad news. You will probably find out that a person you have recently met passed away. They looked good and healthy to you, so you will be even more surprised. This event will make you start thinking about the transiency of life and how little you care about your health.

Dreaming of organizing a glamorous party usually means that you will get an invitation to a wedding, christening, birthday party, or some other celebration. Considering that you care a lot about presenting yourself in the best light, you will start picking an outfit for that event as soon as you get invited.

Meanings of dreams can be simpler. If you have recently been to a glamorous party, that has made a strong impression on you, for sure.

Glamour is a prettier version of reality.