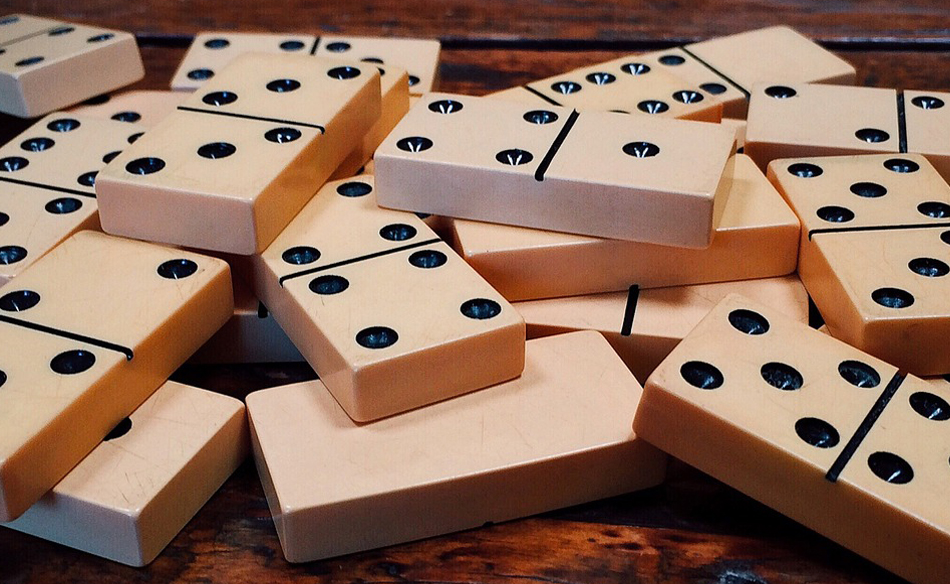 To dream of dominoes
If you see dominoes in a dream, it means that you are not telling the truth. You are probably often in situations that ask for resourcefulness, which is why you have to stay quiet about some things so that they don’t harm you. You are trying to be careful so that people from your surroundings wouldn’t catch you in a lie or brought into question everything that you have been talking to them about.

To play with dominoes
When you are dreaming of playing with dominoes, it means that the risk will pay off. Some obligations are exhausting to you, so you will want to bring some uncertainty into your everyday routine. You like all activities that increase your adrenaline and promise a crazy and unforgettable time. You will start doing something that will bring you both profit and pleasure, but you wouldn’t complain even if that didn’t bring you any financial gain.

To see others playing dominoes
If you see someone else playing with dominoes, that symbolizes an excessive worry about your health. You have probably had a minor illness, but you are afraid that your health condition will get jeopardized more. It is important to remember that stress can bring you bigger problems, so try not to think about the worst but best scenarios for your future. You should keep a positive mindset in the most difficult situations.

To win playing dominoes
Dreaming of winning in dominoes means that you can’t accept a defeat. You don’t believe that the important thing is to participate, not win, but you always try to be the best and most successful in everything. You expect the same from your partner and associates you work with as well. Many people feel pressure when they are around you, and they can’t relax. You often see their maximum effort as not good enough, so you do everything by yourself in the end.

To lose in dominoes
A dream in which you are losing in dominoes means that you will embarrass yourself in front of a large group of people. You may participate in a conversation about something that you don’t know anything about. In your attempt to be an equal interlocutor, you will say something that will make other people mock you. That will be the moment when you realize that it is better to be wisely silent sometimes.

To knock down dominoes
This dream means that you need to give people a chance to show you that they have changed. Someone probably disappointed you, and you don’t want to listen to their reasons for such actions. Give them a chance to show you how sorry they are and don’t hold a grudge, especially if we are talking about someone important to you.

To see knocked down dominoes
If you see knocked down dominoes in a dream, that symbolizes a loss. That can be related to material damage or a loss of the person that means a lot to you. We might be talking about an older friend or family member. On the other hand, this loss can relate to a loved one who will decide to move far away from you, as well. You will realize that you have lost the only person you could have confided in, which will be extremely hard on you.

To make something from dominoes
If you are dreaming of building something from dominoes, it means that you are a creative and imaginative person, but you don’t use your talents in your everyday life. You probably do something that doesn’t ask for such traits, so you have started to neglect them. Try to find a hobby where you could use them. That might even become the main source of income for you one day.

A dream in which you see someone else building something out of dominoes means that you will meet someone who will impress you with their attitudes and views on life. You will realize that you have looked at many things from a wrong angle. They will be a breath of fresh air in your life. Your relationship might not turn into something more than friendship, but you will see someone who you can rely on in them.

To buy dominoes
Dreaming of buying dominoes means that you do something that doesn’t interest you at all. The main motive for it is money, and you can’t wait for the end of the shift to get out. You don’t have the luxury to do what you want, but you will not sit around doing anything, but you will work to survive until you manage to find a job that you love. If you are courageous enough, try to start your own business. You could combine business and pleasure since you would do what you love and make money at the same time.

To sell dominoes
This dream is telling you not to try to hide the mistake you have made. You are probably embarrassed, and you want no one to find out what you have done. However, the truth will come to the surface sooner or later, and then you will face harsh criticism because you didn’t admit what all of it was about.

To bestow dominoes to someone
If you are dreaming of bestowing dominoes to someone, that is a warning not to play with other people’s emotions. Don’t give someone who revealed their feelings to you false hope. It is better to tell them right away that you don’t feel the same instead of stalling them until you figure out what to do. You can’t have a backup in love.

To receive dominoes as a gift
When someone gives you dominoes as a gift in a dream, it means that you have a secret admirer. That person is probably a colleague from work or college that you had a chance to work with only a couple of times before. Your intelligence and readiness to accept and do your job the right way amaze them. They might not admit it to you, but you will know who they are after this, for sure.

To steal dominoes
If you are dreaming of stealing dominoes, that is a sign that you should grow up. Your family members and friends are warning you that you are too immature and childish. However, that is the defense mechanism that protects you from any kind of unpleasantness. You are probably stopping people from hurting your feelings with it.

To dream of someone stealing your dominoes
Dreaming of someone stealing your dominoes means that you are angry with someone you love for no reason. Your partner might have done something that you didn’t like, and you can’t forgive them. These situations are exactly the ones that could destroy your relationship permanently. If you care about someone, you can’t let trivial conflicts affect your relationship. Show that you understand them and that you are ready to compromise.

Meanings of dreams can be simpler. If you have recently played with dominoes or watched other people do, that has made an impression on you.

Dominoes are small plates divided into two parts, where every part consists of an empty space or one to six dots.