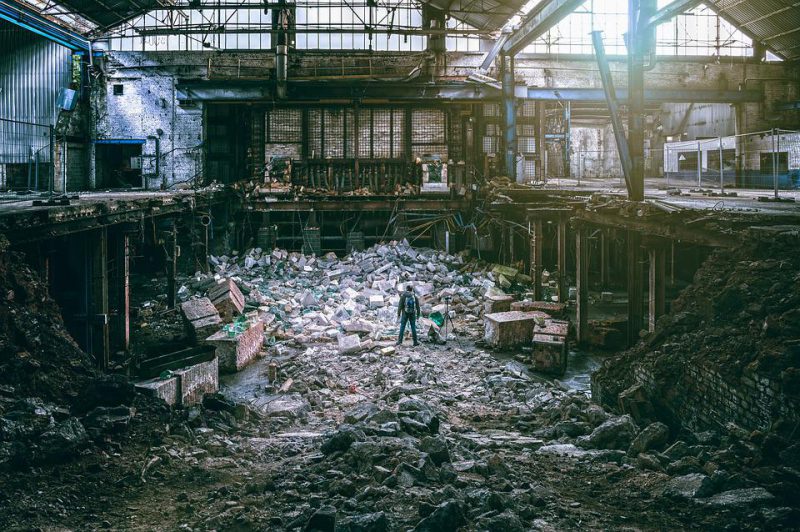 To dream of demolition
If you see something getting demolished in your dream, it warns you that you have a hard time succeeding because of despondency. People might be fascinated by you as long as they don’t get to know you better. Your negative attitude toward life and surroundings is slowly starting to bother them, and they distance themselves from you without explanation, not wishing to be around such dark energy.

To dream about demolishing something
When you dream about demolishing something, it symbolizes parting ways. You might hurt your loved one, who will not want to be in touch with you anymore. You will tell that person something they can’t get over, which is why your friendship, collaboration, relationship, or marriage will end. You will blame your loved one for it without trying to see your mistake.

To dream of someone else demolishing something
If you dream of someone else demolishing something, it implies that your efforts will get underestimated. Every idea or proposition you make will come under criticism by those only looking for flaws. They will not let you take risks but continue to clip your wings, which is why dissatisfaction will pile up within you.

To dream about someone stopping you from demolishing something
A dream wherein you see someone else stopping you from demolishing something means you have to listen to a piece of advice you have recently received regarding your private life or business. You might not be able to look at the situation that you are in objectively, while other people can see the bigger picture. You have to acquire the suggestions you got out of best intentions because of it.

To dream of voting for the demolition
When you dream of attending a meeting and voting for the demolition of something, it means you will share responsibility for something with other people. You don’t want your decision to be final and be guilty of a possible failure. You will ask others to state their opinions, as well, and make a decision about future moves based on consensus.

To dream about other people voting for the demolition
If you dream about someone else voting for the demolition of something, it implies that you will get rid of a major obligation. You will probably transfer a part of the job that you do to your coworker. Another possibility is that you will share some chores with your family members or a partner. That will give you more time for some bigger and more serious issues.

To dream of rejecting an order to demolish something
If you dream of refusing to demolish something, it means you will question the decisions that someone known as the authority figure in your surroundings has made. That can be an older family member, a superior, or your coworker. You will wonder if what that person demands from you is right, fair, and achievable and what kind of consequences it might cause.

To dream about organizing a demolition
Organizing a demolition in a dream means you will work, and others will take credit for it. You might work on one project with a group of people who will sit on their hands, do nothing, and give you additional chores while you try to finish your part of the job right and on time. All of you will get praise for the job successfully done in the end.

To dream of protesting against the demolition
Protesting against the demolition of something in a dream means you will stand up to injustice. You will have a chance to decide on someone’s faith with a group of people and make an unfair decision in your opinion. You will try to change it but get overvoted. In the end, you will realize that you can’t do anything else but try to stop the actualization of that decision.

To dream of other people protesting against the demolition
When you dream of someone else protesting against the demolition of something, it implies you have to fight for yourself more. You watch people who possess less knowledge, experience, or skills than you achieve great things or some benefits daily, while you often stay short-sleeved because you don’t know how to fight for what you want and deserve.

To dream of someone demolishing your house
If you dream of someone demolishing your house, it means you will be the target of gossip because of some decisions or actions. Even the people you don’t know will talk about you. The worst you can do is to go around and explain yourself to everyone individually. It is better to let that situation get forgotten.

To dream about demolishing someone else’s house
Demolishing someone else’s house in a dream means you have to question some decisions you have made. You can’t build your happiness on other people’s misery. You have to remember the saying – don’t do to others what you don’t want them to do to you, because life could sooner or later take revenge on you for something you have done.

To dream of other people demolishing a house
If you dream of someone else demolishing a house, it implies that you will hear the news regarding a family member, friend, or acquaintance that will shock or disappoint you. You will wonder what happened to that person and if there is a good reason for what they are doing.

To dream about demolishing an old house
Demolishing an old house in a dream means you are ready for change. You have been thinking about it for a long time but lacked the courage to do anything. You will soon make some specific moves to provide yourself and the people you love with a better and safer future.

To dream of other people demolishing an old house
A dream wherein you see someone else demolish an old house means you have to realize that you have let life pass by you. You are continuously waiting for something, but you have to be proactive. Nothing significant will happen in your life if you don’t snap out of it.

To dream of other people demolishing a factory
When you see someone else demolish a factory, it means you have to watch out for sabotage. Your success, effort, and hard work bother someone, and they will not calm down until they ruin your reputation. If you realize who that person is on time, you will be able to stop them from executing their evil plan.

To dream of demolishing a building
Demolishing a building in a dream means you have to take care of your actions because someone depends on you. You are not responsible solely for yourself but for other people’s future, as well. Because of it, you need not make big and important decisions overnight.

To dream of other people demolishing a building
If you see someone else demolishing a building in your dream, it implies that you are worried about your future. You probably depend on someone and don’t like the decisions the person in question has recently made, but you can’t do anything to make them change them.

The meanings of dreams can be a lot more trivial. If you have recently watched or demolished something, it has left a strong impression on you.

Demolition is the destruction of something.