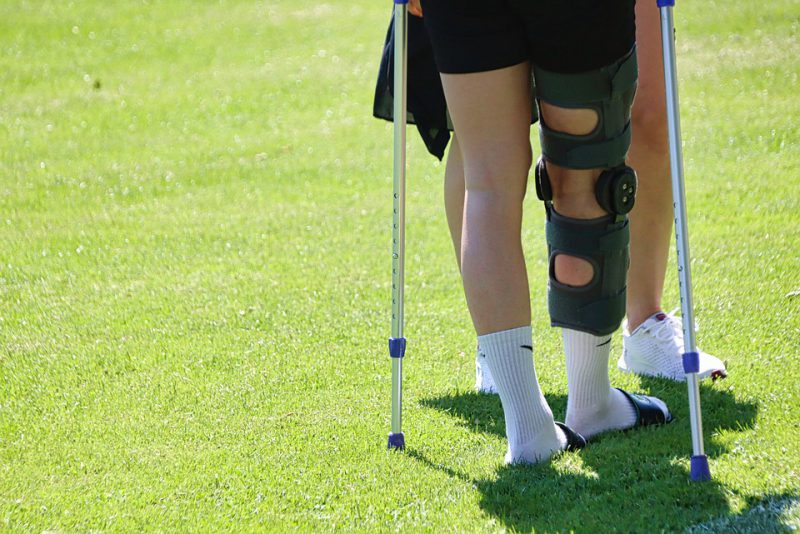 The motif of crutches is not too common in dreams, but both men and women dream of it equally frequently. Interpretations of such dreams depend on the context in which they occur and the details that follow them.

To dream of a crutch
If you see one crutch in a dream, it means that you are not entirely satisfied with something in your life. That can have something to do with your professional or personal life. People who have successful careers might not have luck when it comes to love or vice versa. You might have given up on looking for the best way to have a beautiful future too early.

To dream about crutches
A dream wherein you see a pair of crutches means that your failures will discourage you. You have probably experienced something that made you feel depressed. You have to give yourself time to overcome the crisis. Luckily, you have the support of your family members and close friends, which is crucial for your recovery.

To dream of a loved one walking on crutches
When you see your partner, one of the family members, or your friend walking on crutches in a dream, it means that you worry about that person for no reason. They might have made the decisions you disagree with or believe are bad. However, time will tell that you were wrong, and you will have to congratulate that person on the courage and wisdom they presented.

To dream of a stranger walking on crutches
A dream wherein you see a stranger walk on crutches means that you will make sure to help someone solve a problem that has been bothering them for a long time. You will probably find out about a difficult life of an individual or family through your friend or the media and get involved in a charity to help them.

To dream of tripping while on crutches
If you dream of tripping on crutches, it means that you have to get used to the new situation as soon as possible and make peace with some things. Big changes have happened to you lately, and you will have to accept them to move on. Your future will be even more beautiful if you learn some lessons from the past.

To dream of someone else tripping on crutches
A dream wherein you see someone else trip while walking on crutches means that one of your family members, friends, or colleagues has a problem that you know nothing about. You are too focused on yourself, your obligation, and your needs, and you don’t see that the person that means a lot to you is going through a serious crisis. You have to dedicate time to those you love and make sure to help as much as you can.

To dream of falling on crutches
If you dream of falling while walking on crutches, it means that you are still adjusting to a new situation in your life. You might have changed your job, dwelling place, or relationship status, and it is natural to need some time to get used to it. Luckily, you have people you can count on, and it wouldn’t be bad to ask for advice or suggestions from someone you trust.

To dream about someone else falling from crutches
When you see someone else fall while walking on crutches, it means that you have to support the people you are close with instead of criticizing them. You might disagree with some of their actions or decisions, but you don’t have the right to meddle in anyone’s life. You can give advice when someone asks for it only.

To dream of a loved one being able to walk without crutches
If one of your loved ones can walk without crutches even though they needed them before in your dream, it means that something will gladden you. You might hear the good news regarding a family member, friend, or colleague. You will probably organize a get-together or party in the honor of that person’s success.

To dream of someone hitting you with crutches
If you dream of someone hitting you with crutches, it means that you have missed a great chance for success in your business or personal life. You might have thought that the next opportunity would be better, but you were wrong. However, that doesn’t mean that you need not fight for a better and more quality future.

To dream about hitting someone with crutches
Hitting someone with crutches in a dream means that you make too much effort to get your loved one out of lethargy. One of your family members or friends possesses great potential but doesn’t take advantage of it enough. No matter what you say, you will not convince that person to change. You have to accept them the way they are and help as much as you can or leave them alone.

To dream of buying crutches
Dreaming of buying crutches means that you could finally start the actualization of a long-term idea or project. You will make an objective plan and try to predict all the possible challenges and obstacles on your journey. Your effort will pay off in the future if you stay persistent and patient.

To dream of selling crutches
Selling crutches in a dream means that you have a hard time achieving your goals. You have probably set unrealistic goals and feel stressed out because of it. You have to change your tactic and solve the problems one by one. You could choke if you keep biting off such big chunks.

To dream of getting crutches as a gift
If you dream of someone bestowing crutches on you, it means that you need not be afraid for your future because people who wish you well surround you. You are not even aware of how precious it is to have friends that you can always count on.

To dream about bestowing crutches on someone
Bestowing crutches on someone in a dream means that your friend or acquaintance will ask you for a favor and that you will put your obligations aside to give them a hand. We are talking about a person that you have always been able to count on, which is why you believe it is your duty to pay them back now.

To dream about stealing crutches
Stealing crutches from a hospital, shop, or another place in a dream means that you will embarrass yourself in a large group of people. You will probably have a chance to talk to them about something you are not familiar with. In your desire to be an equal interlocutor in that conversation, you will say something that will make them mock you. Only then will you realize that you should have kept your mouth shut.

If you dream of stealing crutches from someone else, it means that you regret offending someone. You probably didn’t do it on purpose, or you got provoked. It is still not too late to apologize.

To dream about breaking crutches
Breaking your crutches in a dream symbolizes failure. You might have invested your money into something entirely unprofitable, or you have realized that your relationship doesn’t have a future, which is why you have decided to end it.

The meanings of dreams can be a lot more trivial. If you have recently walked with the help of crutches or seen someone use them, it has left a strong impression on you.

Crutches are a forked orthopedic aid with a handle that people with a disability use to walk by holding them under their armpits.