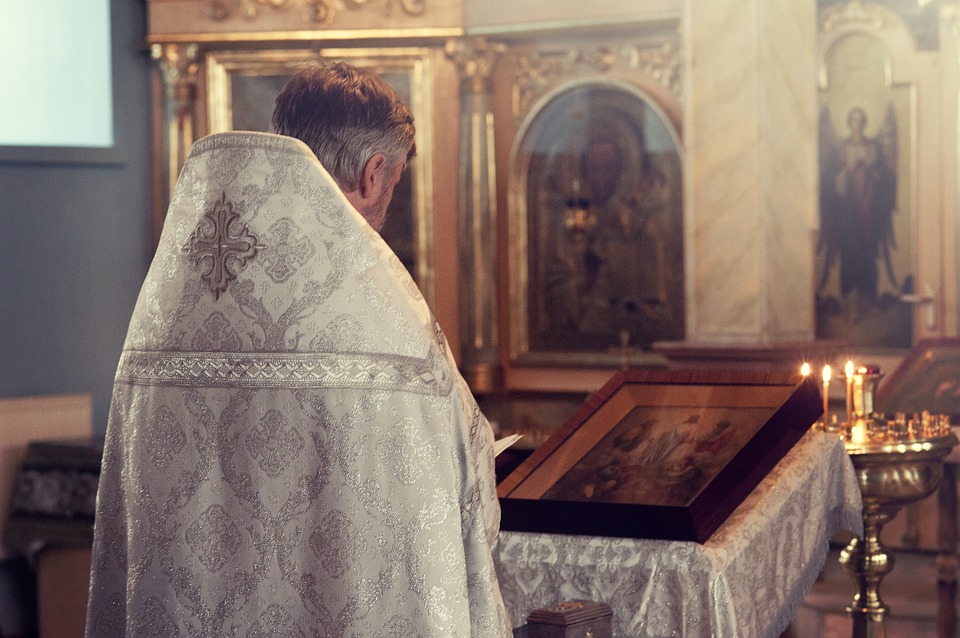 To dream of a clergyman
If you see one clergyman in a dream, it means that you will be in an inconvenient situation. You might disagree with someone you will ask for a favor. You will try to convince them that you are right, but the person in question will not want to give up on their beliefs.

To dream of clergymen
If you see multiple clergymen in a dream, it symbolizes a long and carefree life. You believe that you know yourself the best, which is why you carefully listen to other people’s pieces of advice but rarely apply them. You make an effort not to wrong anyone because a peaceful conscience is what makes you satisfied and happy.

To dream about talking to a clergyman
When you are talking to a clergyman in your dream, it warns of scams. Someone might falsely introduce themselves to you, which is why you will say more than you should. You will believe in that person’s good intentions but realize that you have been tricked.

To dream of kissing a clergyman’s hand
If you dream of kissing a clergyman’s hand, it means that you will give in and agree with the majority about an important topic or problem. Even though you don’t like going against your opinions, you will conclude that it is best to support what other people say this time and actualize that decision together.

To dream about other people kissing a clergyman’s hand
This dream means that someone’s attitude, decision, or action could surprise you. You will realize that you have had an entirely wrong opinion of that person and that you have believed others more than your own knowledge and experience. You might even realize that the person in question is interesting, skilled, and smart even though you didn’t get such an impression before.

To dream of kissing a clergyman
Kissing a clergyman in a dream symbolizes boredom. You might have fallen into a rut, and every day is the same for you. You long for excitement, but you will not experience it if you continue spending every night in front of the TV. You have to improve your social life and renew contacts with other people, and your life will change.

To dream about falling in love with a clergyman
This dream means that you like someone unavailable. That can be a friend or colleague who already has a partner or someone a lot younger or older than you. You are afraid of admitting your feelings to yourself because you know that such a confession would cause disastrous reactions from people around you. You stay quiet because of it and hope that your feelings will fade on their own.

To dream of getting married to a clergyman
When a girl dreams of getting married to a clergyman, it can mean that you fantasize about living comfortably without working much. You might be disappointed in love because you have had numerous failures, which is why you have decided to find a well-off partner instead of someone you like because of their traits. However, you have to ask yourself if you are truly that type of person.

If a married woman dreams of marrying a clergyman, it symbolizes exhaustion. You probably have many obligations, which is why it wouldn’t be a bad idea to share some chores with your family members, partner, or work colleagues.

To dream of confessing to a clergyman
Making a confession to a clergyman in a dream means that you have a guilty conscience because of some sins from the past. You might have offended or hurt another person and regret that now. Another possibility is that you didn’t recognize a good opportunity before, which is why you have decided to miss it. Anyhow, you have to move on and learn something from the previous experiences not to repeat the same mistakes in the future.

To dream about lying to a clergyman
This dream means that you lie to yourself. You probably can’t and don’t want to admit that you don’t make much effort to achieve your goals and wishes. You always talk about how you do your best to make progress or how you want to change something in life, but that is far from the truth.

To dream of a clergyman giving you communion
A dream wherein you take communion from a clergyman means that you will discover someone’s secret. You will probably be in the wrong place at the wrong time and come across shocking findings. However, you need not share that information with other people because you have to ask yourself how you would feel if you were the center of such a scandal.

To dream of a clergyman christening you
When you dream of a clergyman christening you, it means that you have changed. You might have finally realized that you need not worry about the things you can’t change. Because of it, you have decided to be more tolerant of yourself and the ones around you and to preserve your mental and physical health. You will experience beautiful and peaceful old age because of it.

Such dreams can refer to your business life as well. You might make career progress, but a better paid -job will carry more responsibility with itself.

To dream of a clergyman divorcing you
It is not common for the clergyman to give their blessing for a marriage to end in real life, but anything is possible in dreams. If you have such or similar dreams, it means that your relationship with a partner is unstable, and you often wonder how your life would look like if you were not together anymore.

To dream about running away from a clergyman
Running away from a clergyman in a dream means that you panic. You often make a mountain out of a molehill, and your friends and family tell you to relax in vain because their words can’t reach you. You think that no one understands you, but the paranoia brings you more harm than good in your daily life.

To dream of chasing a clergyman
Chasing a clergyman in a dream means that you will find a soulmate only when you stop looking for one. You make an effort to impress someone you like too much, which scares and chases them away. You have to stop stressing over having someone by your side, and the right person for you will show up.

To dream about fighting with a clergyman
A dream wherein you beat a clergyman up means that you will be the target of gossips. Someone will spread lies about you to discredit you, and you will not be able to do anything to stop them.

If you dream of a clergyman beating you, it means that you have let other people step over you, and now is the time to stand up for yourself.

If you dream of fighting with a clergyman, it means that your past sins will soon see the light of day. The truth will reach the people you love no matter how hard you try to hide it.

To dream of killing a clergyman
This dream can mean that you will disappoint someone or ruin your reputation with reckless actions. One your decision or move will cause harsh reactions in the people around you, and you might lose support and protection of the ones you have counted one until now because of it.

To dream about a dead clergyman
A dead clergyman in a dream doesn’t have a positive meaning, unfortunately. Such dreams predict immense changes. Your boss might promote or demote you against your will, or your partner will not hear your pleas not to accept a job that will distance you from one another.

The meanings of dreams can be a lot more trivial. If you have recently seen, talked to, or asked for a blessing from a clergyman, it has left a strong impression on you.

Definition of a clergyman

A clergyman is a religious person who can perform religious services and rituals.