To Dream about Bridesmaid – Meaning and Symbolism

Home » B » To Dream about Bridesmaid – Meaning and Symbolism 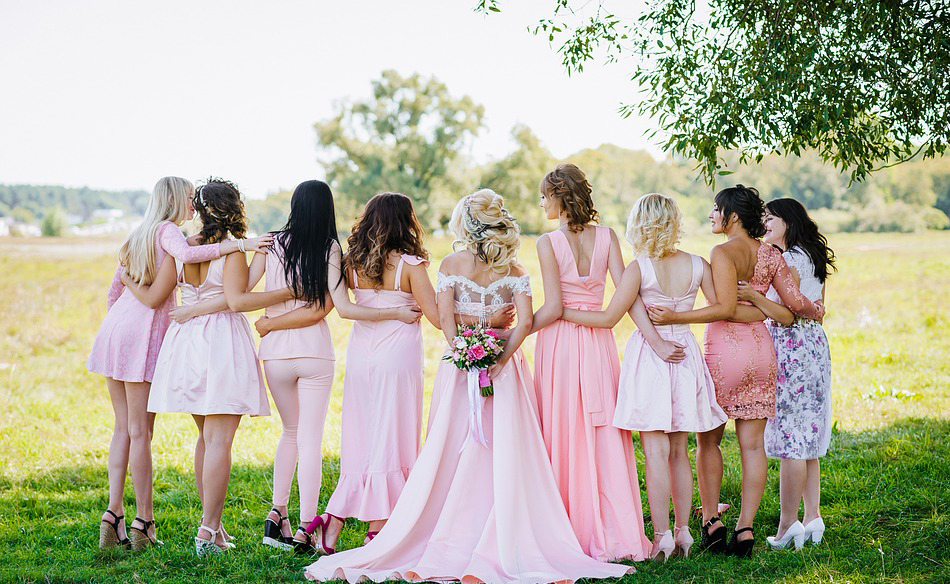 Both men and women have dreams with motifs of a bridesmaid often, even though younger people have them more frequently. When you see a bridesmaid in a dream, that can have multiple meanings depending on the context in which a dream occurs and details that follow it.

To dream of a beautiful and well put-together bridesmaid
If you see a well-dressed and put-together bridesmaid in a dream, it means that you feel like the love and attention that you are giving to other people is not reciprocated to you. You sometimes believe that you love your loved ones a lot more than they love you. However, you stay in such relationships because you are afraid of loneliness. You think that it is better to be in bad company than alone.

To dream of being a bridesmaid
If you are dreaming of being a bridesmaid, that can mean two things – either you lack excitement and joy in life, or you envy someone on their success and happiness. There is a chance that someone from your surroundings has achieved everything you have fantasized about. Instead of using them as a role model and motivation to fulfill your dreams, you have negative feelings toward that person and can’t be happy for them. You are not doing yourself a favor because you are only poisoning yourself with hatred by thinking like that.

Dreaming of other people talking to a bridesmaid is a sign that you are not ready for a serious relationship yet. You are someone whose free spirit doesn’t let you settle down next to someone. What’s more, the fact that you will have to find a partner with who you will spend the rest of your life sooner or later scares you a lot. Another meaning of this dream is that you might hear bad news related to one of your family members or friends.

To dream about arguing with a bridesmaid
A dream in which you are arguing with a bridesmaid usually means that you are in a relationship or marriage with a jealous person. We are talking about someone who loves you without a doubt, but they don’t give you space to breathe. You long for freedom since you are constantly constrained. Your partner constantly wants to know where you are, and they often question who you are hanging out with or accuse you of not wanting to spend time with them. In the long run, this relationship doesn’t have a bright future.

If you see someone else arguing with a bridesmaid in a dream, it means that you will try to reconcile two people that have been on bad terms for a long time. You care about both of them and believe that their relationship shouldn’t be the way it is now. You will make sure to bring them together, even though you know deep down that your mission is almost impossible.

To dream of fighting with a bridesmaid
If a woman dreams of fighting with a bridesmaid, it means that she will feel betrayed in real life. Someone close to you will probably do something that will hurt or disappoint you. You don’t know how to deal with that or how to forgive that person. It would probably be best to openly talk about it and tell them everything that is bothering you since you will only destroy your mental health if you don’t do that.

When a man dreams of fighting with a bridesmaid, there is a chance that he will argue with his friend because of a woman. You might point out some of the bad actions or decisions that your friend’s partner has done or made, but he will not take that the right way, and you will be sorry for even saying anything. There is also a chance that he will do that to you.

To dream about kissing a bridesmaid
If a man dreams of kissing a bridesmaid, it means that a stranger will show great respect for him. You are not even aware of the fact that someone admires your intelligence, resourcefulness, and professionalism. That gesture will surprise and gladden you.

However, if a woman dreams of dancing with a bridesmaid, it means that she shouldn’t hide some details from her past from her partner. If that person truly loves you, they will be understanding of your mistakes and actions. Don’t doubt your loved one since that is extremely dangerous in every relationship.

To dream of a bridesmaid stealing your bouquet
Women have these dreams more often than men. When you are dreaming of a bridesmaid stealing or snatching a bouquet out of your hand, it means that you have a rival. That person will do anything to seduce your partner or ‘steal’ someone you like. Nothing will stop them from getting what they want, so be very careful. Don’t accuse your partner of participating in their games since they don’t have anything to do with that.

To dream of chasing a bridesmaid
Chasing a bridesmaid in a dream usually means that you are still not over your ex-love. There is a chance that you think about someone from time to time who was a big part of your life. You are not together anymore, but that doesn’t stop you from wondering how things would look like if you made different choices then. It is hard to get rid of such questions, especially when you go through so many things with someone. However, you have to turn your focus to the future because beautiful things are expecting you there.

When you see other people chasing a bridesmaid in a dream, it means that your friend will put you in an uncomfortable position. They will ask you a favor, but if you decide to help them, you will step on many people’s toes. However, you will do what they are asking from you without much thinking since you believe that your friendship is honest and permanent.

To dream of running away from a bridesmaid
Running away from a bridesmaid in a dream symbolizes your need to admit your true feelings to your partner. There is a chance that you don’t have the same feelings for that person anymore. You know that you love them, but you also think that such love can’t last forever. It is important to be honest with yourself and then tell them where you stand. Telling the truth to your partner is the least you can do.

A dream in which you see someone else running away from a bridesmaid means that someone’s problem will amuse you. Your friend or colleague will probably tell you about something that happened to them, and you will realize how insignificant their problem actually is compared to issues other people have to deal with. You will try to explain to that person in the easiest way possible that they are stressing out over something trivial because of that.

To dream of marrying a bridesmaid
When a man dreams of getting married to a bridesmaid instead of the bride, it means that something beautiful will happen to him. You will finally get lucky, and everything will go the way you have planned or wanted. Use the following period to finally achieve something that you have been fantasized about for a long time.

However, if a woman dreams of naked bridesmaids on her own or someone else’s wedding, it means that a close friend will disappoint her. There is a chance that that person will do something that will hurt you a lot. You will decide not to resent them for it because of a long-term friendship, but your opinion about that friend will change a lot.

To dream of killing a bridesmaid
A dream in which you are killing a bridesmaid usually means that you can’t get away from the influence that one person has on you. Someone from your surroundings is probably trying to manipulate your decisions, actions, and plans. They are trying to take advantage of everything you do. However, you have realized what they are doing on time, which is good, and now you just have to deal with that problem.

To dream about a dead bridesmaid
A dead bridesmaid in a dream symbolizes nostalgia for past times or missed opportunities. You probably regret doing something. People who live away from their family and friends often have these dreams.

To dream of buying bridesmaids’ dresses
Buying a bridesmaid dress in a dream usually means that you are ready for something big in your life. It seems to you that you are not doing anything in your life at the moment except waiting for something to happen. However, you should help some events get going. Make a move, and you will see that you will fulfill your dream a lot faster than you have believed.

To dream of selling bridesmaid dresses
This dream symbolizes envy and jealousy. Someone from your surroundings probably has a partner that you fantasize about. While they are enjoying life, you are poisoning yourself with negative energy. It is time to get rid of such negative feelings, work on your self-confidence, and stop comparing yourself to other people.

The meanings of dreams can be a lot more trivial. If you have recently been to a wedding as a guest or you organized it, that has made an impression on you. The same goes for talking about someone’s wedding, reading about it in newspapers, books, or watching it on TV.

Definition of a bridesmaid

A bridesmaid is a husband’s sister, brother-in-law’s mother or accompaniment, wife, or a friend at a wedding. Bridesmaids can also be the bride’s best friends.