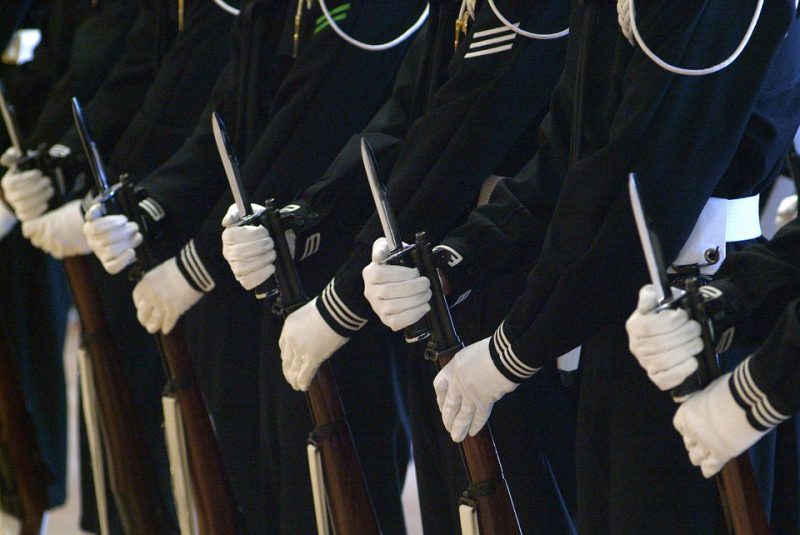 To see a bayonet
Dreaming of seeing a bayonet means that you will become a solider or work in the army. It is most likely that you haven’t planned to do that, but a good opportunity that you don’t want to miss will show up. With time, the job will grow on you and you will be satisfied with the choice you’ve made.

Also, a bayonet can imply that you will be forced to do something against your will. It is possible that you will leave college or a job that made you feel fulfilled, because of financial difficulties. You will have a hard time with accepting that you can’t survive with that job, so you will try to find at least some satisfaction in your new profession.

To operate a bayonet
Dreaming of operating a bayonet means that you want to announce good news to the public, as loudly as you can. You will probably hear something that will change your life for the better. It can be a pregnancy, new job or some event similar to that, which will make you proud.

To see someone else using a bayonet
If someone else is operating a bayonet in a dream, it means that you are trying to reconcile two people in vain. You will be in a difficult situation, or in a so called, cross fire. You will do everything that you can to reason with your colleagues, friends or relatives. However, your effort will not be well received, but your consciousness will be peaceful, because you know that you have done everything you could and that your intentions are good. Just try not to end up in trouble because of it.

To buy a bayonet
Dreaming of buying a bayonet means that you are dissatisfied or angry because of something. Someone in your private or business life was unfair to you. You know that you couldn’t do anything about it, but it still haunts you. You catch yourself thinking about what you could say or do differently, from time to time, but you are aware that a belated reaction will not bring you anything good. You will have to make peace with the situation, but try to act differently the next time, so that you wouldn’t experience the same thing again.

To sell a bayonet
Selling a bayonet in a dream suggests that you should visit a doctor. Some symptoms are probably bothering you, but you are diagnosing yourself by reading blogs and researching forums on the Internet. Instead of trying to be a doctor, ask for help from a professional. It is possible that you will have skin or teeth problems.

To receive a bayonet as a gift
Dreaming of getting a bayonet means that you will get rid of a great problem thanks to a friend’s help. Their advice will mean a lot to you, so you will realize that it is good that you haven’t tried to solve the problem alone. This situation will help you to finally realize who is here for you and who is not.

To bestow a bayonet
Dreaming of bestowing a bayonet means that you will make someone happy. You are not materialistic, so you think that small things make life better. Because of that, you are often saying kind things or buying small gifts to people you know and you often encounter. You are always watching your behavior and it hurts you when you see someone acting rude or unkind. You believe that life is better and easier when everyone is kind to others.

To lose a bayonet
Dreaming of losing a bayonet means that you will make someone sad. It is possible that someone will declare love to you, but you will turn them down and destroy their hopes of you two being together. On the other hand, if you have a partner, they could be disappointed with the relationship you have with their parents or friends.

If someone else has lost a bayonet in your dream, it means that you expect too much from yourself, your friends and associates, as well. You always set the bar too high, so it frustrates you when you can’t reach it. It is even worse when people who affect your job can’t overcome that imaginary obstacle that you have set for them. The way you think burdens and stresses people out. Try to relax and give some space to yourself and others to show their abilities, but keep expectations and disappointments out of it.

To break a bayonet
To break a bayonet in a dream means that you will decide to get rid of a vice. If you smoke, drink or gamble, it is possible that your financial situation will make you question it, so you will decide to get rid of something that is destroying your health and jeopardizing your budget. That will be the best decision you have made in your life.

If someone else is breaking a bayonet in your dream, it means that a colleague, associate or a superior will admit that you are more capable than them. That will not impress you, since their declaration doesn’t mean anything to your life or career, but you should be honored for being a better-quality worker than someone. On the other hand, it will not bring you financial gain either, but it will frustrate you, since you know that someone who doesn’t deserve it, makes more money than you.

To be wounded by a bayonet
Dreaming of being wounded by a bayonet means that you could get in an argument with someone you care for deeply, in the near future. It is possible that they are your partner, close friend or a family member. A misunderstanding regarding finances will be the reason for your fight. It is possible that you will accuse someone of spending too much and explain to them that you are in a difficult situation. However, your words will not be heard, because the other side doesn’t see the problem in the same way. Don’t let that make a strain in your relationship, but insist on talking it out.

A dream in which you are hurting someone with a bayonet symbolizes envy. There is probably someone in your surroundings who is living a life that you have always wanted to have. You wouldn’t ever admit it to them, but that situation is eating you out. You would like to compare yourself to them, but that is crazy at the moment. Instead of beating yourself down, try to find a way to be as successful as that person.

To be killed by a bayonet
Dreaming of being killed by a bayonet symbolizes your fear of being hurt. It is possible that you have had bad love experiences, so you have a hard time with finding a partner now, because you are afraid of history repeating itself. The fact that your friends and family are pushing you to go out and search for a soulmate more intensely is not helping. For you, that is not a solution, but that doesn’t mean that you should let yourself stay alone forever.

If someone else is killed by a bayonet in your dream, it means that you will witness some tricky event. It is possible that two people who love and respect each other will get in a fight and ask for you to arbitrate in that argument. All of it will be really hard on you, but you will be diplomatic about it, so that both sides stay satisfied.

A dream in which you kill someone with a bayonet means that you will meet someone who will impress you will their attitudes and a way of thinking. You will realize that you should observe many things from a different, more positive perspective.

To dream about making a bayonet
Making a bayonet in a dream suggests that you will do something you don’t like. Your boss might give you a project that will take much of your time and nerves. You will make progress slowly and not get rewarded for the effort and hard work you invest in it. Only inborn persistence will stop you from giving up on it.

To dream of other people making a bayonet
When you see someone else making a bayonet in your dream, it means your family member or friend will complain about their job or income to you. You have listened to that person’s complaints for a long time and have given up on persuading them to try to change at least something. You believe everyone can affect their destiny if they have the courage and will to fight for a better future.

If you dream of stealing a bayonet from someone else, it means you might have conflicts with family members or coworkers. The reason for it could be different approaches to solving a mutual problem.

To dream about hiding a bayonet
Hiding a bayonet in a dream means you are a skeptic. You can’t say that you trust people. Such a trait is not bad when it comes to your professional life, but it harms your relationships and friendships. You have to give some people a chance to show you what their intentions are.

To dream about chasing someone with a bayonet
Chasing someone with a bayonet in your hands suggests you doubt your loved one. You have probably noticed that your family member, partner, or one of your friends has been acting strange lately. You get the impression that they are hiding something from you but can’t figure out what. You need not accuse that person of anything if you don’t have solid evidence.

If you have recently held a bayonet or watched a movie or an article about it on TV, that has probably made an impression on you, so this dream shouldn’t be interpreted.

Definition of a bayonet

A bayonet is a knife or a dagger that attaches to a rifle.