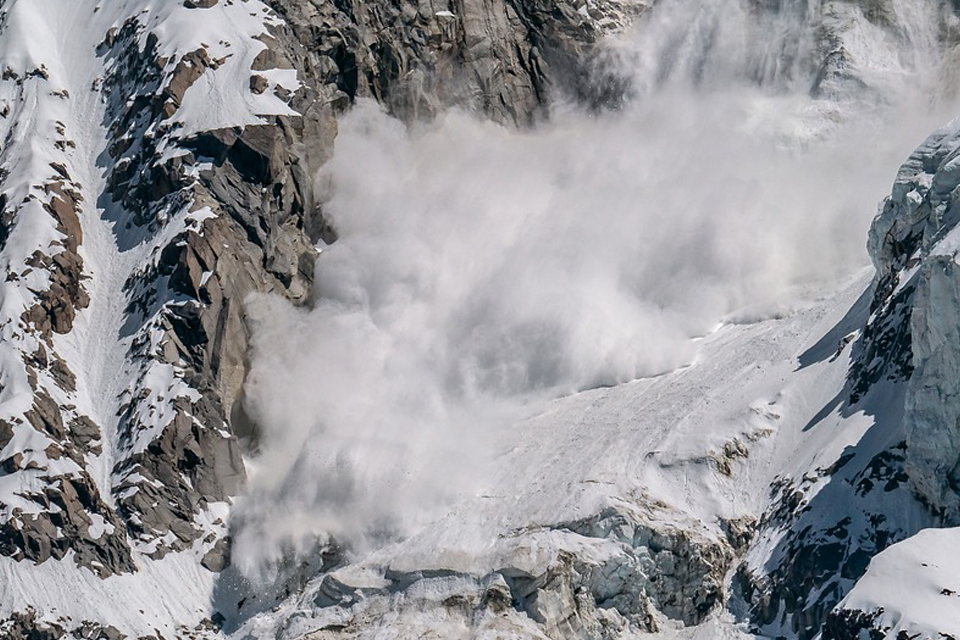 To dream about an avalanche
If you see an avalanche in a dream, that is a warning that danger is approaching you in real life. There is a chance that you will face a string of unfortunate events and situations that will ruin your vacation or plans that you have started to put into action. You will not be aware of the obstacles at first, but you will become more cautious as time passes by and will do everything to protect yourself and your family.

To dream of an avalanche getting to you
Dreaming of being in the middle of an avalanche means that you will have to choose which side you will support. There is a chance that your family members, colleagues, or friends will argue and bombard you with gossips with the intention to justify their actions and prove that they are right. You will be uncomfortable because you will want to be in a good relationship with everyone, but that will seem like a mission impossible.

To dream about an avalanche destroying everything on its way
When you see an avalanche destroying everything on its way, it means that you will have a tough competitor. You will probably feel powerless because you will overestimate someone’s abilities and underestimate yours. Everyone will advise you to have more self-confidence and fight for yourself because it is possible that you will actually persuade yourself that you are not as good as that person, thanks to your attitude.

To dream of causing an avalanche by accident
If you are dreaming of causing an avalanche with noise or some other action, it means that you will be the cause of someone’s emotional breakdown. That person hides their emotions from other people pretty successfully, which is why they are under a lot of pressure. Only one word of yours will be enough to stir strong feelings in them, which will get followed by hysteria and crying. Be careful if you don’t want to be the cause and participant of such episodes because of it.

To dream of causing an avalanche on purpose
A dream in which you are causing an avalanche on purpose means that you have finally realized that you have a problem with gettingclose to people. Thanks to that, there are no many people that you call friends, and you can’t succeed in building a quality love relationship. To put it simply, you have realized that you self-sabotage, which is the first step to solving your problem.

To dream of trying to stop the avalanche
When you are dreaming of trying to stop someone from causing the avalanche with noise, it means that you are someone who always thinks ahead. Your associates, as well as enemies, can’t beat you because you are able to evaluate every situation and act accordingly. You are pretty analytical and believe that you don’t have the sixth sense but make good conclusions based on the information that you receive.

To dream of trying to get away from an avalanche by bike
Even though this dream is unusual, it carries a deep meaning. It suggests that you will soon become aware of your mistakes and learn important lessons from them. You have strongly believed that the universe has conspired against you for a long time because nothing worked out for you. However, you will conclude that you have actually been the cause of all the negative things that have been happening to you. That is a huge step, so don’t give up but continue in that direction, and your life will change for the better.

To dream of getting trapped in an avalanche
If you are dreaming of getting trapped in an avalanche, it means that you are under a lot of stress because of the many obligations and problems that you are facing. Life challenges and gives many demands to you constantly, but the fact that you can’t get rid of the ghosts from the past doesn’t help you either. It is time to take care of your mental health and finally get rid of everything that has been pulling you back. That is the only way to deal with present challenges successfully and think about a better future properly.

To dream about your loved one getting trapped in an avalanche
If you are dreaming of someone you love getting trapped in an avalanche, it means that you might be worried about their health. That person doesn’t listen to your pieces of advice to ask for help from a doctor, which is why you have become desperate. You have also noticed that they are hiding how they actually feel from you, which is stressing you out additionally. The only option you have is to take them to a checkup by tricking them. Even though that sounds like a childish move, you don’t have another option.

To dream of surviving an avalanche
Surviving an avalanche means that the following period will be turbulent, and you will need a lot of strength and courage to survive it without consequences. The worst of all is that people that you love will not understand but judge you for everything bad that is happening. Remember, you are strong enough to deal with loneliness and judgment, but you have to make sure that all that doesn’t leave deep scars on you that you can’t erase.

To dream of dying in an avalanche
When you are dreaming of dying in an avalanche, it means that you need to take care of the people that you love. You might have neglected them because of numerous obligations and problems, but your loved ones have always been your sanctuary during difficult moments. Make sure to find time for them because of it since that is your duty and obligation in some way, as well.

To dream of saving people from an avalanche
Saving people from an avalanche is a sign that someone counts on you. There is a chance that you have promised to help someone, but you don’t know how, or you have forgotten about it. Only after you encounter that person on the street will you remember that you didn’t keep your word. Either you make sure to do what you have said or openly let them know that you can’t help them.

To dream of saving animals from an avalanche
If you are dreaming of saving animals from an avalanche, it means that your priority list is quite unusual for many people. However, you have a system that you blindly stick to and believe that it brings you success daily. If that is true, don’t pay attention to what others are saying but act the way you believe is best for you.

To dream of counting victims of an avalanche
If you are dreaming of counting how many lives an avalanche has taken, it means that your effort will not pay off. There is a chance that you have invested your time, hard work, and money into something, but you don’t see any results. That will probably stay that way, so it would be better to give up on your idea and dedicate your time to something more constructive.

To dream about losing a loved one in an avalanche
This dream doesn’t have a negative meaning, even though it is extremely difficult. It can suggest that your loved one will manage to solve a big problem, or that their health will improve. Anyhow, you will hear good news regarding that person.

To dream of an avalanche covering your house
If you are dreaming of an avalanche burying your house, it means that family relationships scare you. The communication among some family members is obviously bad, but you don’t know what to do to solve that problem. On the one hand, you would like to persuade them to be more understanding of one another, but on the other, you know that you shouldn’t meddle in that.

To dream of watching an avalanche on TV
This dream means that you think about the problems that you can’t solve too much. You are used to having everything under control, which is why the situations in which you can’t do anything confuse you. You don’t know how to be a mute observer of something that you don’t like instead of doing something about it. If you learned to relax and figured out what problems are worth thinking about, your life would be a lot easier.

To dream of reading about an avalanche in newspapers
Reading about an avalanche in newspapers means that you don’t have to take responsibility for the mistakes that you didn’t make. You have started to take someone’s mistakes on yourself because you want to protect that person. That is wrong because every person has to deal with the consequences of their bad decisions or actions alone.

To dream about reporting on an avalanche
If you are dreaming of being a reporter that is doing a piece on the avalanche, it means that you have a wild imagination and often believe that you can change the world. It is nice to think that sometimes, but you have to face reality and look at happenings around you completely objectively.

Meanings of dreams can be more trivial. If you have recently seen an avalanche or been in the middle of it, that has made a strong impression on you.

Definition of an avalanche

An avalanche is a name for the collapsing of a large mass of snow from steep mountains and slopes.

One thought on “Avalanche – Dream Meaning and Interpretation”