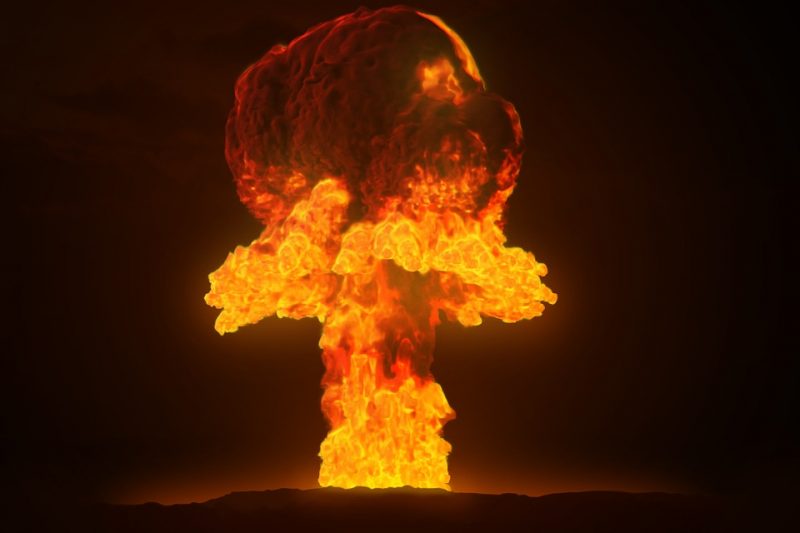 To see an atomic bomb in a dream
Dreaming of an atomic bomb symbolizes a big and unpleasant surprise. You will probably hear some news regarding your job that you didn’t expect. You have wrapped yourself in a safety blanket called a current job and you have postponed all plans you had when it comes to starting your own business. You are not someone who depends on other people, but you would like to be carefree for a change. You will realize that you are wrong and you’ll continue where you left off with your plans. This situation will teach you a very valuable lesson.

Dreaming of an atomic bomb explosion
When you see an atomic bomb explosion in a dream that symbolizes worries. It is possible that you are under a lot of stress, because you feel pressure at work. Your health will suffer because of it the most, so your loved ones will insist that you visit a doctor. You probably have problems with a boss who is making your life miserable. You will have to start working out to get all of that negative energy out of your system.

To make an atomic bomb
Dreaming of making an atomic bomb means that your enemies will get what they deserve. Someone will probably do bad things behind your back and they will spread lies about you. You will become aware of the situation and you will protect yourself and your interests in the best way possible.

Dreaming of an atomic bomb activation
A dream in which you activate an atomic bomb symbolizes repressed anger and dissatisfaction. Some event or an argument has shaken you deeply. You are bothered by the fact that you haven’t responded in the right way. You are thinking about all the things you could have said to defend your beliefs and you are mad at yourself for not doing it. If you don’t forget about it, there is a possibility that you’ll often dream of these dreams and the ones with similar meaning.

Dreaming of other people activating an atomic bomb means that someone from your environment doesn’t wish you well. They will try to hurt you out of envy, jealousy or malice. They will do everything to alienate you from your partner or friends, or they will try to get you fired. Anyhow, you will have to be really careful, because they will use your every wrong move against you.

Dreaming of an atomic bomb deactivation
Dreaming of trying to stop the catastrophe means that your hard work could finally pay off. You have been working a lot lately and you have managed to create a balance between your private and business life. All of it could be rewarded soon. Your superior will realize that you are an important member of their team, so they will gladden you with a raise or stimulation. If you owe a private business, it is possible that you will have a successful and good collaboration with a business partner.

Dreaming of other people trying to deactivate an atomic bomb means that you will hear wonderful news. Someone could offer you your dream job. That doesn’t fit into your future plans maybe, but you will gladly accept the offer.

To threaten with an atomic bomb
Dreaming of threatening to activate an atomic bomb symbolizes dissatisfaction in your life. Nothing is going according to the plan lately. You haven’t accomplished any plans regarding your private or professional life and now you feel like a complete loser. That makes you depressed, so you don’t have the will or energy to continue fighting. You need motivation and support, so the best thing you can do is to ask for an advice from someone you trust. You will realize that things are not as bad as they seem now.

Dreaming of someone else threatening to activate an atomic bomb symbolizes fear of death or sickness. Someone’s early death has probably made you really sad, so you have started to think about it. You will decide to finally visit a doctor and make sure that everything is fine with you.

Consequences of an atomic bomb explosion
Dreaming of seeing atomic bomb explosion consequences symbolizes a new beginning. You will firmly decide to change many things in your life. It is possible that you will go on a diet, quit smoking or drinking, change your job or even move. Considering that you haven’t been mentally ready to keep promises you’ve given yourself before, you will doubt in the success at first. However, this time things will be different. You will realize that mistakes have led you on the wrong path and you will finally be able to see everything more clearly.

Dreaming of an atomic shelter
Dreaming of hiding in an atomic shelter means that you are anxious. You are stressed out by things that you can’t change. That gives you anxiety which you have transferred into your dreams as well. You can’t accept that you are helpless, because you are not used to surrendering without a fight. However, fighting is useless this time, so you will have to stop tormenting yourself with it.

Dreaming of other people in the shelter means that you are tired of everyday obligations and stress. You would like to run away from everything for a while, but you know that is not possible. That has made even communication with your loved ones bad. You have a feeling that they don’t even understand you, so they are blaming you for not having enough time for them. You are aware of it, but you can’t organize your time in order to catch up with everything. Try to do something for yourself, because this situation could have fatal consequences in the long run.

Dreaming of a nuclear war
This dream symbolizes fear of losing control over your own life. Some events have made you think about those things. You are afraid that someone else could take your life into their hands. That would mean that your wishes and plans would never come true. In order to stop that from happening, you will have to put a lot of effort into it and make some decisions that many people will disagree with. However, you will be aware that you’ll need to do something radical, so that your life doesn’t end up under someone else’s control. Act as soon as possible. When you make the first step everything will become easier, because you will know that is the best thing for you to do.

To dream that multiple atomic bombs have destroyed the whole planet
Such destructive dreams reflect your current mood because you might be sad for something or someone, or something has disappointed you. You have probably changed from an optimist into a moderate realist to a pessimist. You have to change the circle of people you spend time with to get out of that state.

To dream of buying an atomic bomb
Dreaming of buying an atomic bomb suggests that you will manage to recognize a big opportunity that will show up in the future. You have been waiting for your five minutes of fame and will finally get them. Your loved ones might not agree with some decisions or actions you will make, but they will realize with time that you were right.

To dream of stealing an atomic bomb
Stealing an atomic bomb in a dream implies that you might get involved in risky business ventures. You will realize you don’t want to waste time and that you need a push. However, you have to think well about the possible negative consequences of your actions because there is a chance you will regret making some of your decisions.

Definition of an atomic bomb

Atomic bomb is an instrument used in war, because it has destructive and explosive power.