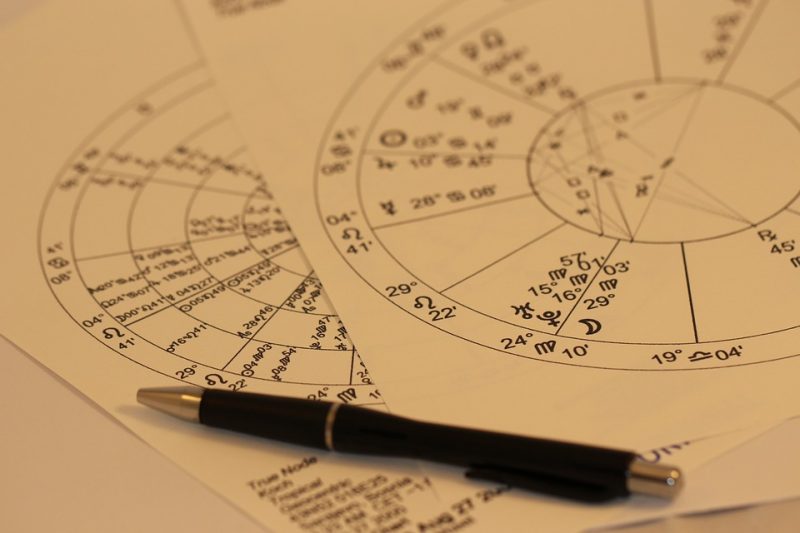 Dreaming of an astrologist
Dreaming of an astrologist or astrology can have multiple meanings. You are probably used to others doing everything instead of you. With the lack of initiative, you count on abstract things like position of stars or mug readings even. You are afraid of taking over responsibility for yourself and your actions. It is possible that a loved one will see it too, so they will ask you to act your own age.

Another interpretation of a dream is that you hope that your loved one will change in vain. You are a romantic who believes that love can overcome anything. It is possible that you are aware of flaws your partner has, but you will not pay a lot of attention to them. You think that you’ll be able to change them and that they’ll compromise because of your relationship. With time, you will realize that your expectations will not come true, so you’ll have to decide if you are ready to change for someone who is not worth sacrificing for.

To be an astrologist
Dreaming of being an astrologist means that you’ll start working on achieving a goal that you’ve set your mind to a long time ago. You will want to use your free time the best you can. If you have a hobby, it is possible that you’ll dedicate your time to it and try to transform it into a business. If you want to learn something new, take a course that will provide you with interesting facts and relationships with people who have similar interests.

To meet an astrologist
Dreaming of meeting an astrologist means that you are someone who complains a lot. You are known as someone who always laments over their destiny in your friend group. You often complain about relationships with your family, partner or friends, or about health and work. People around you are trying to help you, but they constantly fail at it because you don’t have a desire to change. You often complain about missed opportunities, but you are neglecting the present without thinking about the future. Your friends are done with listening to you and the honest ones will admit it to you. If you don’t move by yourself, no one will be able to help you.

To talk to an astrologist
To have a conversation with an astrologist in a dream means that you are lonely with your ideas and that you need someone who will support you. It is possible that you’ll want to start your own business or transform your current hobby into a stable job. Some people from your surroundings will openly judge you because you are ready to risk a lot in order to do ‘something out of fun’, while others will try to talk you out of it. Rely on your intuition and don’t be afraid to try. That is the only way to know what to expect in the future.

A dream in which someone is talking to an astrologist symbolizes your curiosity. You have a desire to acquire new knowledge and skills, but you are afraid of people from your surrounding’s reaction. Your close friends will probably find it weird that you’ve decided to take a course or change a profession at your age. You will not pay attention to it, because you don’t want anyone or anything to limit you. That goes for fear of failure especially.

If you dream of an astrologist who is telling you about your future, but you can’t remember what they said in the morning, it means that in the near future you’ll not face changes that you’ve wanted for a long time. Things will stay the same they are, so you’ll have to invest a lot of patience, effort and hard work in order to achieve what you want.

However, if you remember what they were telling you and it is bad, it means that the time to change your beliefs about people and things around you has come. You are probably in a rut, so even good opportunities seem negative to you. You doubt yourself and your abilities too much, so every idea you want to realize you set to failure right at the beginning. You will have to change the way you look at things, if you want to achieve anything in your business or personal life.

To have an argument with an astrologist
A dream in which you have an argument with an astrologist symbolizes financial loss. You have probably invested money into something which was supposed to make your life easier, but it turned out that it is not really the case. It might be related to buying something that is not as useful as you though it might be, or to an investment that won’t pay off. All of it will disappoint you, because you believed that was your key to a success. You have to be extra careful while trying to get out of that situation, because you might end up in even bigger trouble if you make a mistake.

Dreaming of other people having an argument with an astrologist means that your lack of knowledge will get you in trouble. You will be a part of the conversation whose topic will be unfamiliar to you. In an attempt to be an equal interlocutor, you will say something that will make other people mock you. That will teach you to sometimes keep your mouth shut.

To kiss an astrologist
Dreaming of having any kind of an intimate relationship with an astrologist symbolizes your need for excitement. It is possible that you are not satisfied with your intimate life. If you are single for a long time, that is completely justified. However, if you are married or in a serious relationship, your partner probably doesn’t fulfil your expectations in bed. To your suggestion to spice things up they usually react with a sneer. That makes you fantasize about changing your partner or a secret affair more often.

Dreaming of someone else kissing an astrologist means that you are jealous of your friend’s or colleague’s private life. It seems to you like their relationship is ideal and their partner perfect. That frustrates you because they have everything you long for.

To hide from an astrologist
Dreaming of hiding from an astrologist means that your consciousness is restless. You have impulsively hurt someone with your words or actions. You know that you should apologize but your pride is stopping you. You are trying to justify yourself, but you are aware of your mistake. If you don’t want these dreams to torment you in the following period, you will have to do something about it. Don’t let your spite distance you from a loved one.

To have a fight with an astrologist
Dreaming of having a fight with an astrologist means that your past is stopping you from moving on. You made bad moves that have influenced the course of your life. You have put yourself in an inconvenient situation and you have a really hard time of getting out of it. However, with help and support of people close to you, you could at least try to change your life. You have to be aware that no one will give you anything for free and that you will have to work hard to achieve your goals.

If you see someone else fighting an astrologist in a dream, it means that you will hear good news. Someone else’s happiness will gladden you. It is possible that you’ll be invited to a wedding or a party.

To kill an astrologist
Dreaming of killing an astrologist means that you’ll be disappointed with a loved one. Someone has hurt you with their words or actions. You are not sure if you are able to forget about it and the fact that they have apologized doesn’t help either. Anyhow, it’s not your pride that is hurt, but your feelings, which is why you have a way harder time with forgiving them.

Dreaming of other people killing an astrologist means that you are tormented by injustice. You will be a witness of an event or conversation whose results will bother you, because they will be unfair. You will try to affect them, but it will be unsuccessful. You will soon realize that you can’t change anything, so you’ll make sure to distance yourself from it.

If you are an astrologist or know someone who is, these dreams are not interpreted then. Also, if you have read about horoscope, or watched a TV show about it, that only means that your brain is processing information it received in real life, so dreams shouldn’t be interpreted.

Astrology is a pseudoscience that connects individuals and their reactions in the world with position and movement of heavenly bodies. An astrologist is someone who practices astrology.