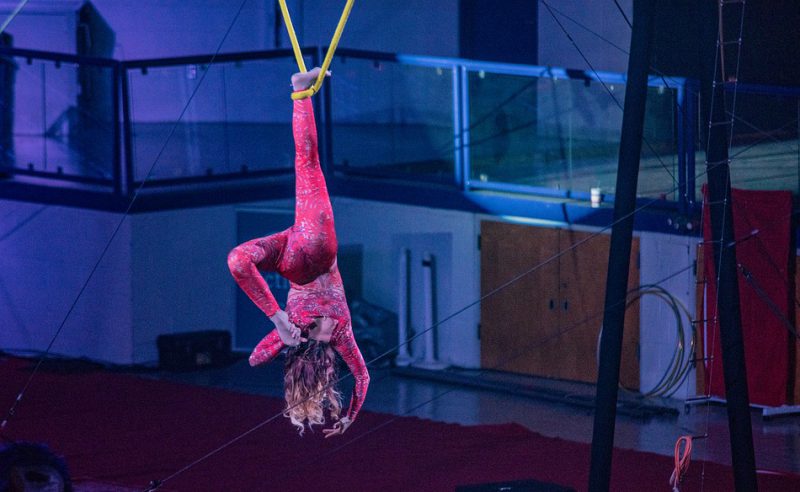 To dream of being an acrobat
When you are dreaming of being an acrobat, it means that you will get rid of worries. You will realize in the following period that you are unnecessarily stressing yourself out with things that you can’t control. You will also conclude that you are spending your energy in vain, which is why you will finally start enjoying life. If your boss doesn’t appreciate your hard work and effort, you will let them see if they can get around without you. You have decided that you will not let anyone underestimate you. If your partner wants to change your habits and make you adjust to them, you will tell them that they should look for someone else who they can modify the way they want because you will not be anyone’s puppet.

To dream of seeing an acrobat
When you see an acrobat in a circus in a dream, that symbolizes unexpected financial gain. You will be lucky when it comes to business, and when you invest in something, it will pay off double. You will also bring luck to other people, and they will be happy to see you because everywhere you go, something nice will happen. You will have success in games of chance as well and get many practical things that you need.

To dream of an acrobat on a rope
When you are dreaming of an acrobat on a rope, that is a warning that you are in danger. There is a chance that you have gotten involved in an illegal business or that you owe money to people from the other side of the law. You will try to get away from that environment, but that will not be as easy as you have imagined. Because of that, you will fear for your safety, as well as the safety of the people that you got involved in your suspicious business deals. You will try to hide the truth from your partner and family until you realize that you are forced to admit everything.

To dream about arguing with an acrobat
A dream in which you are arguing with an acrobat usually means that you will argue with a stubborn person in real life. You will not be able to prove to them that your advice is not a malicious criticism but, on the contrary, you are saying and doing all of that out of good intentions only. You will probably give up in one moment because you will realize that all of your efforts were for nothing.

To dream of fighting with an acrobat
If you are dreaming of fighting with an acrobat, it means that your financial situation will not be the best. You have been having problems with the lack of money for a while now, while additional expenses will only make the already difficult situation even more complicated. Be careful if you are planning on investing in a business, project, or idea.

To dream of kissing an acrobat
If you are dreaming of having any kind of an intimate relationship with an acrobat, your subconsciousness is telling you that you often think about someone who is not available to you. There is a chance that they are taken, so having a relationship with them would be risky for both of you. On the other hand, there is a chance that they wouldn’t reciprocate your feelings and that you only interpreted the attention that they are giving to you as flirting.

To dream of an acrobat in an empty hall
If you see an acrobat practicing in a hall without an audience, it means that everything will stagnate in the following period. You will not make great progress, but you will not have to deal with big problems at work or in private life either, luckily. It is up to you to be patient and wait for your chance. It wouldn’t be a bad idea to get rested, travel somewhere, or dedicate your time to the family.

To dream of an acrobat in your home
If you are dreaming of an acrobat in your home, it means that you will witness an extremely tense situation. There is a chance that you will be dragged into a conversation at work that doesn’t suit you or while hanging out with your friends. One of the people present will ask you to pick sides. You will feel even more pressure because you know that no matter what you say, you will offend someone present.

A dream in such a displaced context can symbolize bad communication with a partner or one of the family members as well.

To dream of an acrobat falling
If you are dreaming of an acrobat that unexpectedly falls, that is a bad sign. There is a chance that your partner or one of the colleagues from work will disappoint or betray you. Besides that, an acrobat that is falling symbolizes big expenses, so be careful. Do all business obligations that have something to do with finances cautiously. If you have to sign some business contracts, contacts with banks, or a sales contract, make sure that you understand every word written in it. If you continue to be careful, there will be no reason for worry.

To dream about an acrobat with a flower
If an acrobat is carrying a flower in your dream, it means that you will hear bad news from an acquaintance. If an acrobat is a female, that is a sign of sudden positive changes in your life. There is a chance that the problem that has been torturing you for a long time will finally be solved, and you will enter a more peaceful phase of your life.

If you are dreaming of an acrobat after going to the circus or watching a TV show where acrobats are the main characters, you are probably just under the impression of what you saw. If you are an acrobat, this dream shouldn’t be interpreted.

To dream of an acrobat on a trampoline
When you are dreaming of an acrobat on a trampoline, that symbolizes some changes in your life. You will have a dilemma in the future on whether to accept an offer from a friend and change your job or move to another city or to stay in your comfort zone. There is a chance that you will finally get enough courage to enter a completely new situation that will most likely have a positive outcome.

To dream of an acrobat with balls
If you are dreaming of an acrobat with balls, it means that you have been afraid for a while now. You are trying to balance your relationships with family members without hurting anyone, but you are starting to realize that everyone expects you to resolve that situation in your home. Your subconsciousness is telling you that being a mediator is not good for you, but you don’t have a choice but to get involved.

Interpretations of these dreams depend on the context in which they occur and the feelings that follow them. People who are dreaming about acrobats are usually excited, amazed, or worried. The dream has a positive meaning in all three cases.

Excitement and fear
If you are dreaming of a person performing acrobatics that makes you feel excited or scared, it means that big and good things will happen to you. Your hard work and effort will pay off double. That also means that you will surprise someone with your actions.

Amazement
If you feel amazement during the dream, it usually means that you will hear good news or encounter a loved one that you haven’t seen for a long time.

To dream of getting married to an acrobat
If an unmarried woman dreams of getting married to an acrobat, it implies that she is still not ready for marriage. The idea that your married friends are making life decisions with their partners attracts you, but you have to know that you wouldn’t cope well with having to share everything with another person.

If a married woman dreams of marrying an acrobat, it means she resents her partner for something but hasn’t admitted it yet.

To dream of helping an acrobat
Helping an acrobat in a dream can suggest that someone will underestimate your work, effort, knowledge, or the job you do. You might have a chance to talk about yourself with someone prone to humiliating others because they believe they are superior to everyone else. That person will treat you the same way, but you have to make sure not to react aggressively.

To dream of an acrobat robbing or scamming you
This dream suggests that you are naïve and don’t learn from past mistakes. You have believed in false promises or been hurt and humiliated so many times without learning not to trust everyone you encounter.

To dream of hiding from an acrobat
If you dream of hiding from an acrobat, it means you are prone to exaggerating everything. Everyone has to know about it when you have a problem, not because you are asking for advice but because you believe you will feel better by talking about it. You often overdo it by worrying about work or your relationship status.

To dream of chasing an acrobat
Chasing an acrobat in a dream means you will realize you are not up to a task you have volunteered to do. You will have to swallow your pride and ask for help. Make sure to learn something from this situation and figure out how big your potential is.

To dream of an acrobat dying while performing
If you dream of an acrobat falling from a height and dying, it means it is high time to leave the past behind. You have let it pull you back, which is why you haven’t thought about your future. Now is the moment to devote your time to more constructive things and do something good for yourself.

Definition of an acrobat

An acrobat is a person that performs gymnastic feats in a circus.